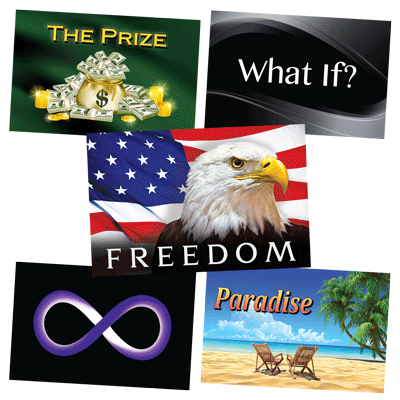 “My husband found a Paradise tract inside a Mountain Dew carton of 36 sodas. I am not sure how it got there, but I know the Lord wants me to purchase these and begin distributing them. THANK YOU!”

“My small group at church and I delivered a large amount of food to the Cobb County police, and I got to share your Freedom tracts with 25 officers. I believe if you are going to feed others, then you must share the Gospel as well.”

“Everyone I give this Infinity tract to loves it!!”

“I have been giving out the Paradise tract constantly.  I keep a stash of them right inside my cellphone leather cover. The receptivity rate has to be right around 98-99 percent!! BEST tract ever!! Thanks for introducing me to the concept of witnessing to people you meet throughout the day… IT WORKS!!

“We love dropping your tracts wherever we go!!! Thank you for making them and making it so easy to share the gospel!”

“I have recently been handing out gift cards to strangers at Walmart and sharing with them that God loves them and was compelling me to bless them. But I really wanted to give them a tract with a quick but compelling gospel message with the gift card! That is why I am excited for your tracts to arrive! I want to personally say thank you for being faithful and a light in this dark world!

“I really like your tracts. I am hoping to get our men’s ministry up and going in January. Your tracts and books will be what we use. I haven’t found any better.”

“Paradise is a great tract to give out! I just ask people: ‘Would you like a ticket to Paradise?’ I’m sure they know it’s not a ticket to Hawaii, but everyone so far has said, “Yes.” Some have thanked me when I say that it tells how to get to Heaven.”

“I love this Infinity tract. I have passed it out on many trips. Its design draws people in. I love to approach a stranger and tell them I have a gift for them. Also, I like to leave the card in plain view most places I go, restaurants, grocery stores, men’s rooms, service stations, 7-11s, etc. You never know who God is going to send to that place and, here again, the card DRAWS THEM IN. Keep up the good work and fight.”

“I love your tracts. They are good looking tracts, easy to read, interesting, and get to the point quickly before someone loses interest.”

“Had a great time sharing the Freedom tract at the Fort Mitchell parade. We distributed about 500. People seemed to really like the Freedom tract design. Over the two hours we were there, I had only two people decline taking one. Most folks were impressed by the design.”

“What a joy it was to take 12 of our grands with us this year to downtown Grand Rapids to hand out over 100 The Prize tracts, along with fresh chocolate chip cookies. Each year the kids get more excited to go. Thanks for writing great tracts. Three of the grandsons think you should go next year!”

“I gave out around 250 Paradise, Infinity, The Prize, and What If? cards at a food distribution event. The folks seemed to really like the cards. The front of the cards are very well designed. Also, the cards fit great in the pants pockets. I spotted only one card that was left behind on a table. I grabbed it for future use.”

“Those tracts you composed hit people in the heart. I put a Prize card next to the registration lady’s keyboard at the hospital. She began tearing up and said how that was just what she needed to read. She said she really liked the card’s message and wanted to give some out. So we gave her about thirty Infinity, What If? and The Prize cards I had in my cargo pants. Praise the Lord for that!”

“These tracts are so great to leave in restrooms, tables, etc., for people to take with them! Short and to the point! Thank you!”

“Your tracts are the best tracts I’ve seen!”

“Greetings! Grace and peace to you from God the Father and the Lord Jesus Christ! My name is Marcus, and I’m a freshman at Moody Bible Institute. A class I’m taking this semester is ‘Introduction to Disciple Making,’ and our professor has us reading the book One Thing You Can’t Do In Heaven. I am greatly convicted and encouraged by the book — an interesting combination! As I was on your website, I was thrilled about the availability and low price of your tracts! Thank you!”

“I just wanted to write and say thank you for the Paradise tract I was handed at the Atlanta train station! I live in South Africa, and was over in America recently on a business trip; and it was so encouraging when the person gave me the tract – God’s tangible way of letting me know that He was thinking of me!”

“Of all the tracts that I’ve used over the years I find your tract The Prize to be the most effective at explaining not only the Judgment of God, but His mercy and His love — and it also uses the hook and it sets the hook — the way the Lord showed me to do when I’m speaking to people. Today is the day of salvation; you have no promise of tomorrow.”

“God Bless you brother Mark. I wanted to share a quick story. I was at the beach recently, and on the boardwalk I ran into a church group, and they were passing out Gospel tracts and sharing God’s Word. I had a wonderful time passing out tracts with them. Anyway, I met a woman who was with them, and she said she was saved by one of your Gospel tracts. She was walking down a sidewalk and someone took one of your Infinity tracts and tore it in half, she found the bottom half of the tract and she was saved from the bottom half!!!”

“Best tracts I have ever seen!”

“The What If? tract is absolutely incredible! PERFECT for getting people to think past ‘right now.’ I know how you love questions and use them to challenge the unbelievers and the lukewarm, so the What If? plus the Infinity tract are simple and to the point. . . . Many folks are on the go, but eternal questions are gonna flow through the minds of many in my path, Lord willing!”

“The other night, I arrested a guy on some outstanding warrants after he lied to me about his name. During my investigation, I learned that the driver of the car was his brother and that their dad recently died due to a heart condition. I like to witness to people on the way to jail, but he was in a real bad mood. I tried to break the ice by asking him if he and the driver were brothers or cousins. He said that he wanted to ‘plead the fifth.’ I decided to soften him up a little bit by telling him that the driver told me that his dad recently died and that I was sorry to hear about it. After a few seconds, he said, ‘Yeah…my father just died.’ I asked him if his dad was a good person and he said that he was, he drank, but he was a good person. I didn’t think that the Good Person approach to witnessing would work. I was racking my brain trying to figure out how to reach out to this guy.

I took one of the What If? tracts and enlarged it and taped it to the clear partition that separates me and the prisoner. I figured that if someone back there didn’t want to talk, they might be willing to read about it on their ride to jail. As we are nearing the jail, the guy asks me who wrote the stuff on the paper. I told him that a friend of mine wrote it. He starts weeping and said that it was very touching. He begins to tell me that he knows that he has not been living a life that would be pleasing to God. I told him that the great part about God and Jesus is that they are waiting for him to come back. They are waiting with open arms ready to receive him. He said that he had been baptized as a child but as he got older, he began going the other direction.

When we got to the jail, I told him that I gave his brother and the other people in the car a booklet that further explains what was written on the paper. I told him that I had one booklet left and he could have it if he wanted it. He told me that he would really like to read it. So . . . what started out as him wanting to ‘plead the fifth’ ended with him wanting and taking a copy of One Second After You Die!”

“Man, it was easy to give out a ton of tracts on both July 3rd and July 5th to the fireworks crowds—650 tracts one night and 890 the next, along with a dozen of your books, One heartbeat Away. It is SO encouraging to me! I REALLY like YOUR three tracts (Paradise, What If?, and Infinity) and have some really big events coming up, while crowds are out in the summer. The only problem is, I’ve just about run out of tracts! Thank you for EVERYTHING you do!!!!!!!!!!!”