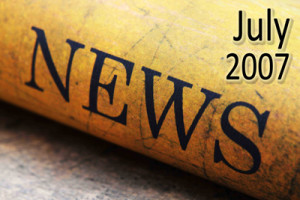 Ã¢â‚¬Å“Because that Abraham obeyed my voice, and kept my charge, my commandments, my statutes, and my laws.Ã¢â‚¬Â

Just as I encourage believers to look forward to a summer of being on the front lines, I try to do the same here in Atlanta. A couple of weeks ago, we had the annual Gay Pride event downtown. I never take speaking engagements that weekend. I want to be here in Atlanta, every year, until the festival no longer exists. One of the more interesting things about the festival is that it gets smaller and smaller each year. They wonÃ¢â‚¬â„¢t tell you that on the news. There are probably a couple of reasons for the shrinking numbers. One is that homosexuals die much younger than heterosexuals. When you look at the studies, which you can find on the Internet, they usually die twenty to thirty years earlier than heterosexuals. One guy at the festival told me that he has buried many of his friends this past year. The other reason that the festival gets smaller each year is that homosexuals canÃ¢â‚¬â„¢t have children. The only way to make their movement bigger is to recruit more people into it, or to convince more heterosexuals that it is okay.

A study that I read said that the number one way to propagate your belief system is to have children and then teach it to your kids. So whether you are a conservative, liberal, gay, communist, Christian, etc., you have kids, and teach them your belief system. It was a very interesting study and it made a lot of sense. Obviously homosexuals canÃ¢â‚¬â„¢t reproduce, so that is one reason their movement gets smaller, no matter what the media tells you.

God gave us great favor with the police during this past festival, and they didnÃ¢â‚¬â„¢t try to stop the Christian message. As a matter of fact, many of them even encouraged us. At one point during the weekend, I was outside the festival talking with some of my street preacher friends and noticed these two lesbians walking into the festival. They had shirts on that said, Ã¢â‚¬Å“Christ First.Ã¢â‚¬Â There were many different churches represented there trying to recruit members to their gay friendly church. One ChurchÃ¢â‚¬â„¢s motto was, Ã¢â‚¬Å“Separation of Church and Hate.Ã¢â‚¬Â Meaning that their church will not hate the homosexual, but will encourage them in that sin. So the implication is that Christians or churches who teach differently actually do it from a position of hate.

As the ladies walked past me, I said, Ã¢â‚¬Å“Christ first, gay second?Ã¢â‚¬Â One lady looked at me and said, Ã¢â‚¬Å“Just pray about it.Ã¢â‚¬Â Those four words can be amazingly great words to hear and to obey, but those four words are also code words that many people use in a wrong way. What people are saying many times by using those words is that Ã¢â‚¬ËœI prayed about it and God let me know that it is okay.Ã¢â‚¬â„¢ So she prayed about lesbianism, and God let her know her lifestyle is okay.

I want to warn you about praying with an agenda. Many times we take our agenda into our prayer times and want and expect God to bless it. We think we hear from God, but we may have really heard what we want to hear from ourselves. What would be one way to test what we feel we have heard from God? The greatest way is to make sure any answer that God gives you is not contrary to His word. It will line up with what the Bible says. That is the best way to tell.

What if I say that God is leading me to be one who doesnÃ¢â‚¬â„¢t share his faith but just encourages others to do it, or to pay for missionaries to do it?

See I really donÃ¢â‚¬â„¢t need to pray about sharing my faith, I really just need to obey.

What if I feel like dishonoring my Mom and Dad? Well that is something I donÃ¢â‚¬â„¢t even need to think about or pray about because Exodus 20:12 says,

Ã¢â‚¬Å“Honour thy father and thy mother: that thy days may be long upon the land which the LORD thy God giveth thee.Ã¢â‚¬Â

What if I am feeling led to lie about a situation, and I am feeling like it is the right thing to do to make things right? What if I even pray about it, and think this is where God is leading? Well you better check that against His word, because the Bible says in Exodus 20:16

Lying is not an option that God leaves open to us.

What if you decide to give financially to GodÃ¢â‚¬â„¢s work but you just have this mindset that it is an obligation that you must do as a follower of Jesus Christ?

Ã¢â‚¬Å“Every man according as he purposeth in his heart, so let him give; not grudgingly, or of necessity: for God loveth a cheerful giver.Ã¢â‚¬Â

What if I have enemies that I really want to get back at because of the way they have treated me, treated my friends, or treated Jesus? Well I really donÃ¢â‚¬â„¢t need to pray about how to get them back because it says in Matthew 5:44,

Ã¢â‚¬Å“But I say unto you, Love your enemies, bless them that curse you, do good to them that hate you, and pray for them which despitefully use you, and persecute you;Ã¢â‚¬Â

There is the answer that I am looking for.

Now please donÃ¢â‚¬â„¢t make the mistake that I am against praying. Absolutely not. I am all for it.

We need to be prayer warriors. We need to walk around worshipping God, praying for others, and asking the Lord to lead us through this life to accomplish His will.

Have a great summer of prayer, and a wonderful summer of obedience. When you read your Bible, you will see the people of faith had great obedience and when they sinned they repented of those sins. Make sure the only agenda you have this summer is GodÃ¢â‚¬â„¢s agenda. It will be an amazing summer!

This is an example of a man and a family that lives on the frontlines. Pray for him and his family and make sure you obey the Lord just like he does.