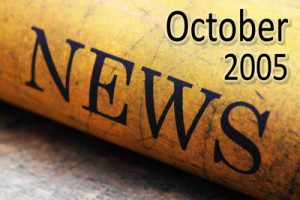 Ã¢â‚¬Å“…[A]nd thou hast praised the gods of silver, and gold, of brass, iron, wood, and stone, which see not, nor hear, nor know; and the God in whose hand thy breath is, and whose are all thy ways, hast thou not glorified.”

The breath of life. Do you take it for granted? How many of us would have to answer Ã¢â‚¬Å“yesÃ¢â‚¬Â to that question?

Hurricane Katrina has obviously gotten so many of us thinking over the past few weeks. I met a guy on the train the other day that was from New Orleans. He has about 250 relatives from there. Since the hurricane, he has only talked with ten of them.

I met a couple of car loads of evacuees at a Dallas hotel. They had lost everything except for what they had in their cars. They were glad to be alive. They told me that a preacher came by the day before and said he was going to help them. They stated that he never showed back up.

One of the maintenance guys at my apartment had an aunt that died during the hurricane. The following weekend, he had eight relatives from New Orleans living with him and his wife.

My next door neighbor is from New Orleans. They couldnÃ¢â‚¬â„¢t find their nine year old goddaughter. Thankfully, they found her four days later alive in an attic. That young girl had ten cousins that were confirmed dead.

When speaking at a college recently, they told me this story about what happened to a relative of a student there: A son and mom were stuck in an attic. They prayed to God for a way out of this situation. Out of nowhere, a small boat comes drifting by. The son swam out to get it, and the two of them paddled away to safety.

A friend of mine is doing assessments for an insurance company in New Orleans. He told me that he went up to a house and the man looked at him and said, Ã¢â‚¬Å“Have you ever been to hell before son?Ã¢â‚¬Â The guy stated that as the water was coming into his home, he kept diving under it to stack tables up so that he could put his diabetic wife on top of them. They could only go so high. When they got to the ceiling, he had to puncture a hole through it and push his wife through. My friend said that when he looked around the house, the water line was literally two inches from the ceiling.

In Acts 17, Paul states in verse 25, Ã¢â‚¬Å“Neither is worshipped with menÃ¢â‚¬â„¢s hands, as though he needed any thing, seeing he giveth to all life, and breath, and all things.Ã¢â‚¬Â God gives you all things and gives you all breath. Would anyone who knows you, know that? Does the breath that God gave you form into words to glorify the giver of that breath?

On a train ride to the airport the other day, three people turned down tracts. I stated to myself, Ã¢â‚¬Å“Nice try Satan. That wonÃ¢â‚¬â„¢t be stopping me today.Ã¢â‚¬Â So I sat down and started reading my Bible. One of those guys came over later and asked, Ã¢â‚¬Å“What are you reading?Ã¢â‚¬Â So we began to talk. He just emailed me and stated about himself:

Ã¢â‚¬Å“I realized…”Michael, you can stop worrying about yourself! You’re taken care of! You’ll dance on the streets of gold forever.” I realized that I’m spoiled for all of eternity, and my time on earth is the one small interval of time God is actually asking me to do a little work for Him. I mean, He sacrificed His only Son and set me up with a life of eternal ecstasy…in return, He’s only asking I tell others about what He’s done for me.Ã¢â‚¬Â

You have a small interval of time to shout about the God who gave you breath and His Son Jesus and what He did for the world. The only acceptable sacrifice on judgment day is the Son of God. Will you be telling anyone about that with the breath that He has given you? The last chapter of my new book is all about time. We donÃ¢â‚¬â„¢t get a mulligan for this life. We donÃ¢â‚¬â„¢t get a do over. We get one shot. We canÃ¢â‚¬â„¢t waste this life. It is the only one that you have got. You must use your time wisely. As the breath in your body slips away day by day, which God will you be praising with that breath in the days to come?

P.S. I just found out that a former Muslim, now a born again believer in Jesus, got to speak at Harvard University recently. After the event, he gave my new book, One Heartbeat Away, to 70 students and 10 Ph. D. Faculty members. Please pray for God to do amazing things with that book at Harvard.