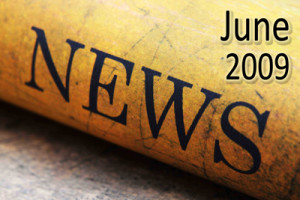 I find that one of the most intriguing things I can do when I witness to people is to find out their belief systems: what they believe and why they believe it. So I am always trying to keep my eyes and ears open to find things that can lead me a certain direction in a conversation, or to find a way to get into a conversation.

When I had jury duty, they would bring witnesses up to the stand. The bailiff would come over and have the person raise their right hand. He would then say, Ã¢â‚¬Å“Do you swear to tell the whole truth, nothing but the truth, so help you God?Ã¢â‚¬Â It was interesting to watch the bailiff. He could have done this in his sleep. He was just rattling off words. So I watched the witnesses respond to that question. But I noticed something else pretty interesting. There was no Bible for the witnesses to put their left hand on. I always remember seeing that on television. There was not a Bible to be found anywhere. So that led me to another question: what God are they talking about when they say, Ã¢â‚¬Å“So help you God?Ã¢â‚¬Â

Jews believe in Jehovah. Christians believe in the triune God: God the Father, God the Son, and God the Holy Spirit. Muslims believe in Allah, a god who cannot be known personally and will weigh all of oneÃ¢â‚¬â„¢s deeds on judgment day. Hinduism is basically Ã¢â‚¬Ëœall is godÃ¢â‚¬â„¢ and Ã¢â‚¬Ëœall is one.Ã¢â‚¬â„¢ In the New Age movement, god is a force and part of that is in you. So you are a god. The god of Mormonism once was a man with a body of flesh and bones on another planet, and hasnÃ¢â‚¬â„¢t always been god. A friend of mine was in Japan and said they have 166,000 gods there. I was talking with a Japanese guy the other day in an airport, and he told me that a tree can be a god, a mountain can be a god, etc. So when those witnesses were taking that oath, what god are they talking about?

LetÃ¢â‚¬â„¢s be very honest about something. If there is one thing you donÃ¢â‚¬â„¢t want to make a mistake about, it is who is the god that you are believing in and worshipping. Why? Because the god you believe in might not be there when you take your last breath.

Ã¢â‚¬Å“Ye are my witnesses, saith the LORD, and my servant whom I have chosen: that ye may know and believe me, and understand that I am he: before me there was no God formed, neither shall there be after me. I, even I, am the LORD; and beside me there is no Saviour.Ã¢â‚¬Â

Ã¢â‚¬Å“For thus saith the LORD that created the heavens; God himself that formed the earth and made it; he hath established it, he created it not in vain, he formed it to be inhabited: I am the LORD; and there is none else.Ã¢â‚¬Â

Ã¢â‚¬Å“Before the mountains were brought forth, or ever thou hadst formed the earth and the world, even from everlasting to everlasting, thou art God.Ã¢â‚¬Â

Ã¢â‚¬Å“For the LORD is a great God, and a great King above all gods.Ã¢â‚¬Â

Ã¢â‚¬Å“O sing unto the LORD a new song: sing unto the LORD, all the earth. Sing unto the LORD, bless his name; shew forth his salvation from day to day. Declare his glory among the heathen, his wonders among all people. For the LORD is great, and greatly to be praised: he is to be feared above all gods. For all the gods of the nations are idols: but the LORD made the heavens.Ã¢â‚¬Â

Ã¢â‚¬Å“The LORD reigneth; let the earth rejoice; let the multitude of isles be glad thereof. Clouds and darkness are round about him: righteousness and judgment are the habitation of his throne. A fire goeth before him, and burneth up his enemies round about. His lightnings enlightened the world: the earth saw, and trembled. The hills melted like wax at the presence of the LORD, at the presence of the Lord of the whole earth. The heavens declare his righteousness, and all the people see his glory. Confounded be all they that serve graven images, that boast themselves of idols: worship him, all ye gods.Ã¢â‚¬Â

Ã¢â‚¬Å“Bless the LORD, O my soul. O LORD my God, thou art very great; thou art clothed with honour and majesty. Who coverest thyself with light as with a garment: who stretchest out the heavens like a curtain: Who layeth the beams of his chambers in the waters: who maketh the clouds his chariot: who walketh upon the wings of the wind: Who maketh his angels spirits; his ministers a flaming fire: Who laid the foundations of the earth, that it should not be removed for ever.Ã¢â‚¬Â

Ã¢â‚¬Å“And men were scorched with great heat, and blasphemed the name of God, which hath power over these plagues: and they repented not to give him glory. And the fifth angel poured out his vial upon the seat of the beast; and his kingdom was full of darkness; and they gnawed their tongues for pain, And blasphemed the God of heaven because of their pains and their sores, and repented not of their deeds.Ã¢â‚¬Â

Last week when I said something to a couple, who blasphemed the name of Jesus Christ, they were not too thrilled with me. But they didnÃ¢â‚¬â„¢t blaspheme the name of another god, just the God of Christianity.

So what God do you believe in? This is such an important question and one reason Satan is working so hard to blur the lines of who is the real God. What God you choose to worship will determine where you spend eternity. There canÃ¢â‚¬â„¢t be any more important thing to figure out in life than this.

One of the things I love about all of those verses above, is how they just show how miniscule I really am. When you know how big God is (and that you arenÃ¢â‚¬â„¢t Him!), you truly sit, stand, and kneel in awe of Him! You realize this entire universe revolves around Him, and then it will be too hard to be too prideful. It makes you want to repent of your deeds and not blaspheme this great, holy God! When you put God in His proper place, all of your life can begin to come to order in the proper way.

Ã¢â‚¬Å“For a thousand years in thy sight are but as yesterday when it is past, and as a watch in the night.Ã¢â‚¬Â

Keep your eyes open. The world is worshiping false gods everywhere you go. Lift up and proclaim the true God of this universe and His Son Jesus. The world needs to know the truth now. Time is flying by very quickly.

P.S. As I travel the country, it is fun to look at cars and see what people drive, and how they make them different from all the rest. Different colors, neon lights, decals, flames down the side, bumper stickers, etc. I do have to say though, the car below happens to be my favorite car of all time! Since we spend so much time in cars, why not use it to get people to think about eternity? 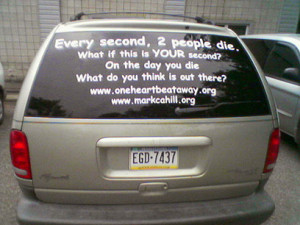