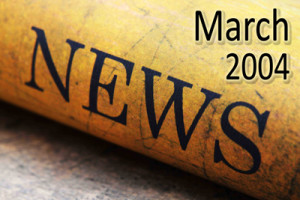 I didnÃ¢â‚¬â„¢t sleep very well last night; I had a lot on my mind. I just saw the movie The Passion of the Christ. As I woke up, I went to the window and saw an unusual sight: we had snow here in AtlantaÃ¢â‚¬â€a couple of inches. It was beautiful.

The movie The Passion was so powerful. It is a masterpiece. And it is intense. It may seem shocking to some at points, probably because it tells the truth. That is why Satan has been stirring people up trying to get them not to watch it. The truth is that it is not anti-Semitic. Although it is violent, itÃ¢â‚¬â„¢s also realistic.

If you havenÃ¢â‚¬â„¢t read Isaiah recently, take a minute to read this description of the suffering Servant in chapter 53 to remember what Jesus did for you:

Ã¢â‚¬Å“Who has believed our report? And to whom has the arm of the LORD been revealed? For He shall grow up before Him as a tender plant, and as a root out of dry ground. He has no form or comeliness; and when we see Him, there is no beauty that we should desire Him. He is despised and rejected by men, a Man of sorrows and acquainted with grief. And we hid, as it were, our faces from Him; He was despised, and we did not esteem Him.

Surely He has borne our griefs and carried our sorrows; yet we esteemed Him stricken, smitten by God, and afflicted. But He was wounded for our transgressions, He was bruised for our iniquities; the chastisement for our peace was upon Him, and by His stripes we are healed. All we like sheep have gone astray; we have turned, every one, to his own way; and the LORD has laid on Him the iniquity of us all.

He was oppressed and He was afflicted, yet He opened not His mouth; He was led as a lamb to the slaughter, and as a sheep before its shearers is silent, so He opened not His mouth. He was taken from prison and from judgment, and who will declare His generation? For He was cut off from the land of the living; for the transgressions of My people He was stricken. And they made His grave with the wicked; but with the rich at His death, because He had done no violence, nor was any deceit in His mouth.

Yet it pleased the LORD to bruise Him; He has put Him to grief. When You make His soul an offering for sin, He shall see His seed, He shall prolong His days, and the pleasure of the LORD shall prosper in His hand. He shall see the labor of His soul, and be satisfied. By His knowledge My righteous Servant shall justify many, for He shall bear their iniquities. Therefore I will divide Him a portion with the great, and He shall divide the spoil with the strong, because He poured out His soul unto death, and He was numbered with the transgressors, and He bore the sin of many, and made intercession for the transgressors.Ã¢â‚¬Â

The problem with the movie isnÃ¢â‚¬â„¢t that itÃ¢â‚¬â„¢s supposedly anti-Semitic. The real problem is that darkness does not like light, which reveals its wicked and evil deeds. The real problem people have is with Jesus. Because He died on the cross for our sins, and He rose from the dead, those who reject Him are actually choosing hell over heaven for all of eternity. That is the real problem. The lost have a conscience, and itÃ¢â‚¬â„¢s convicting them. They can either listen to the truth and deal with it, or can try to stop people from hearing the truth at the theater.

IsnÃ¢â‚¬â„¢t that what happened 2,000 years ago? Jesus was speaking truth. Some wanted to hear it and some didnÃ¢â‚¬â„¢t. So instead of letting the situation play itself out, the Jewish leaders decided not to listen to the message, but to get rid of the Messenger. They had one problem, though: since He was the Son of God, they werenÃ¢â‚¬â„¢t going to be able to kill Him. He was going to be coming back very soon. And they had not planned on that.

The best thing is for each person to hear the truth and then decide what they want to do with that truth. The visual depiction of the scourging and crucifixion of Jesus makes you really realize your sin so much more. You and I put Him up there. My sin is that bad. The movie gets bloody at a couple of points. Most of us donÃ¢â‚¬â„¢t want to see that because of the reality of how brutal those events were. One of my mottos is that if the truth hurts, it is still the truth. The truth is that we should look at those images every day. I donÃ¢â‚¬â„¢t want to forget how much my sin cost the Son of God. Rebelliousness has a price, and I didnÃ¢â‚¬â„¢t pay itÃ¢â‚¬â€He did.

One drop of His blood could have wiped the slate clean, but He didnÃ¢â‚¬â„¢t go that route. The torture, the agony, the sweat, the pain, was for my sins and yours. God hates sin more than any of us realize. His wrath is real. And it really came down upon His Son. But when it was finished, it was finished. The wrath of God will either come down on you for all of eternity in hell, or you can receive forgiveness because it already came down on His Son. Your choice.

The blood of the Son can change anyoneÃ¢â‚¬â„¢s life. If you have surrendered to the King, it has actually washed you as pure and white as snow. How can He love me that much, when I love Him so little? The snow was so beautiful this morningÃ¢â‚¬â€so white, pure, and clean. That is how He sees me. That doesnÃ¢â‚¬â„¢t make sense, but I will take it. Have you? If you have, have you given it away to someone?

I bought a ticket for a man going into the theater yesterday. He was a lapsed Catholic, he told me, and I prayed for him throughout the movie. He was squirming in his seat as he witnessed the Lord go through what he had heard about in church years ago. My book is now in his hands. It is time for James to surrender his life to the Lord. Please pray for him to be broken, repent, and run to the cross, so that he can be as pure and as white as snow for all of eternity.

I finished the writing of my second book just as I ended my time of fasting. It is now in my editorÃ¢â‚¬â„¢s hands. Please pray for Lynn as she edits this book. I canÃ¢â‚¬â„¢t even begin to explain how important the editing process is. It is like a potter at a potterÃ¢â‚¬â„¢s wheel. The clay is there, but it must be molded into something functional that serves an intended purpose. I sent her a lump of clay, and now her job is to mold it into a book that can change lives. That is not easy, which is why man canÃ¢â‚¬â„¢t do that. Pray that the Holy Spirit will be working through her mind and heart and fingertips as she takes the clay and molds a book that will reach masses of people.

The book is geared for the lost. When they read it, they will have truth in their hands. Pray that it says exactly what needs to be said in such a readable way that souls will be saved. I think it is a very important publication.

The whole country is currently talking about Jesus. Are you talking about Him? The lost are in the theaters watching this movie. Make sure you explain to them what this event is all about.

Until the whole world hears,