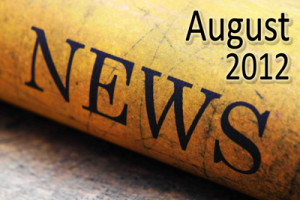 Today Is The Day!!

One of the things that itÃ¢â‚¬â„¢s impossible to discuss enough in Christianity is forgiveness. When Paul instructed us to preach Christ crucified, it was because the sacrifice of Jesus ChristÃ¢â‚¬â€that perfect blood sacrificeÃ¢â‚¬â€can redeem us of all our sins when we become born again. It is the greatest gift of all! Forgiveness is a beautiful thing!

One of the more fascinating things I find as I talk with people is that they all really know that they need forgiveness. They know they have done wrong. Humans know we have messed up. That is one of the most amazing things about our God: He provides forgiveness! You do not see that in most other religions. They are all typically works oriented, but even then, your works just cover your sins; they do not ever cleanse your sins.

Forgiveness is a huge part of Christianity, and it always will be.

As you know, one of the fun aspects of traveling is the people you get to meet! It is like taking a mission trip without having to fly halfway around the world!

On one of my recent trips, I stopped to get something to eat, and as I walked up to the restaurant, I remembered it well. I had been there before, and had this fascinating talk with an atheist in another booth. He was very friendly and had great questions. My kind of conversation!

So as I walked into the restaurant, I began to wonder what would transpire this time. The hostess asked me, Ã¢â‚¬Å“What is in your bag?Ã¢â‚¬Â I told her that it was some books that I wrote. She of course asked, Ã¢â‚¬Å“What do you write about?Ã¢â‚¬Â and we were off and running! As we talked, she let me know that her father was dying of cancer. It was breaking her heart. She was 19 and adored her father! She shared that it had been so hard on her to see her father waste away before her eyes. I also found out that she had a tremendous singing voice and was going to go on one of the TV singing competitions, but didnÃ¢â‚¬â„¢t end up going, because she wanted to be with her Daddy. My kind of daughter! She told me that a pastor had been visiting her dad, and she really liked to read the Ã¢â‚¬Ëœpamphlet thingsÃ¢â‚¬â„¢ that he left. Never forget, tracts do work!

I bought the ladies next to me their meal that day. What an interesting group! It was a group of six sisters! I asked, Ã¢â‚¬Å“No brothers?Ã¢â‚¬Â They told me that their brother had died. So I asked if he was born again. They let me know that he was, so we talked about the hope that we had in Jesus Christ. It was a blessed conversation, but they really missed their only brother. I had run low on books, so I walked out to my car to get a few more for them. I handed a gentleman who was walking past my car a tract. We had a nice quick conversation, and I gave him a copy of One Heartbeat Away. He emailed me a couple of days later. He had read some of the book, and he wanted to let me know that if I wanted real truth, he could tell me what it was. He had connections to some of the most powerful people in the world, and he said people really donÃ¢â‚¬â„¢t know what is going on, as there is so much happening behind the scenes. Well I actually study things like that, so I do know a lot of what is going on. I let him know in some emails that he was just like Pontius Pilate when he said, Ã¢â‚¬Å“What is truth?Ã¢â‚¬Â That is all people are searching for. I told this man that when he finds out who the Jesus of the Bible is, then he will have truth!

When I start witnessing to a waiter or waitress, I usually wait until later in the meal. I spend time chatting with them, encouraging them, and always being friendly. Sometimes a door opens up sooner, but most times it does not. I also look for things like how busy they are, if they have a new table that just showed up, etc. You never want to keep someone from doing their job. As I started posing some questions to my waiter Justin that day, he started opening up. He told me that his dad was never part of his life when he was a kid and basically didnÃ¢â‚¬â„¢t want anything to do with him. He got a phone call one day that his dad was dying. His sister told him that it was probably his last chance to see him. So he drove to go see him and took along his seven-year-old son. But when he got there, he didnÃ¢â‚¬â„¢t go in and see his dad. He was so angry about how heÃ¢â‚¬â„¢d been treated, and he still wanted nothing to do with him. So he and his son began to drive back home. He told me that his son Noah said to him, Ã¢â‚¬Å“Dad, today is the day.Ã¢â‚¬Â He responded, Ã¢â‚¬Å“The day for what?Ã¢â‚¬Â Noah said, Ã¢â‚¬Å“The day for you to forgive your dad.Ã¢â‚¬Â Wow. As we were there talking, it brought tears to both of our eyes. He knew his son was right, so they turned around and headed back to see his dad. I am trying to remember correctly, but I think he told me that his dad died a day or two later. Forgiveness is such a huge thing, and it can literally hold us back from being whom God wants us to be.

Ã¢â‚¬Å“Wherewith shall I come before the LORD, and bow myself before the high God? shall I come before him with burnt offerings, with calves of a year old? Will the LORD be pleased with thousands of rams, or with ten thousands of rivers of oil? shall I give my firstborn for my transgression, the fruit of my body for the sin of my soul? He hath shewed thee, O man, what is good; and what doth the LORD require of thee, but to do justly, and to love mercy, and to walk humbly with thy God?Ã¢â‚¬Â

Remember that all you can bring God for your sins is the blood of Jesus Christ. Nothing else will do on that day.

I met a lady on a plane flight once that wanted nothing to do with God. I asked her if anything happened along the way in her life to push her away from God, and she told me that when she was 13-years-old, the pastor of her Lutheran church came over for a visit. Her mom was Lutheran and her dad was a non-believer, and the pastor told her mom that she had Ã¢â‚¬Ëœmarried a heathen.Ã¢â‚¬â„¢ Well you can imagine that young girl didnÃ¢â‚¬â„¢t want anyone talking about her father that way. She needs to forgive that man for what he said, so that she can move on.

A mom told me once that she used to ask her kids to forgive her when she messed up as a parent. She said that she wanted to model humbleness and forgiveness to them.

A lady who works in hospices told me that she would have patients that just kept hanging on and wouldnÃ¢â‚¬â„¢t die. So she would ask them, Ã¢â‚¬Å“What are you still doing here? Why havenÃ¢â‚¬â„¢t you died yet?Ã¢â‚¬Â Wow! I like her bluntness! Of course, she did it in a loving and caring way, but she told me probably the most common answer she got was that the person needed to forgive someone. Maybe a child, a relative, or a friend was traveling to see them, and they needed to forgive them for something and heal the relationship. She told me that so many times, the person would show up, they would get things right, and then very soon after that the person would die.

Ã¢â‚¬Å“Who is a God like unto thee, that pardoneth iniquity, and passeth by the transgression of the remnant of his heritage? he retaineth not his anger for ever, because he delighteth in mercy. He will turn again, he will have compassion upon us; he will subdue our iniquities; and thou wilt cast all their sins into the depths of the sea. Thou wilt perform the truth to Jacob, and the mercy to Abraham, which thou hast sworn unto our fathers from the days of old.Ã¢â‚¬Â

But the great news about forgiveness is that it gives you freedom! I had a police officer tell me once that he witnesses to other police officers, people he arrests, people he stops as he is doing his beat, etc. He said the forgiveness that he has received from Jesus is something that he wants to share with someone else!

The spirit of unforgiveness can be a very powerful poison. Is there anyone you need to forgive today? A parent, a child, a friend, a coworker, etc? Go for it. DonÃ¢â‚¬â„¢t die with that unforgiveness looming in your life or in theirs, either.

P.S. We have a new talk up on the website that I think you will enjoy. It is called Thanks Moms (and Dads!). It is a talk that I gave at a church on MotherÃ¢â‚¬â„¢s Day, but is loaded with spiritual applications for any time of the year. You can watch it or listen to it, just click here.