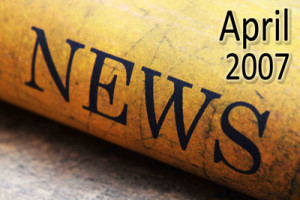 Itâ€™s Getting Hot Out There

A lot of people are talking about global warming these days. The evening news and the Internet are all abuzz. Al Gore did a documentary on it called â€œAn Inconvenient Truth,â€ that won an Oscar. Representative Ed Markey from Massachusetts referred to Al Gore during some proceedings on Capitol Hill as a â€œprophet.â€ It seems years ago Mr. Gore predicted some of the climate difficulties we are facing today. You have to be careful if someone calls you a prophet. A prophet speaks for God, and you better be 100% accurate when you speak for God or there will be some problems coming up in your future. It is better to stick to the other definition of prophet, which is one who proclaims the word, rather than one who foretells the future.

As always, we must go to the Word of God to find out what His opinion of global warming and the environment is.

One thing we should look at is the plagues that God performed through Moses in Egypt. One of them was the turning of much of the water into blood.

God didnâ€™t seem too concerned about the environment when He did that.

God sent frogs all across the land in Egypt and then had them die. The Lord also had the cattle and horses of Egypt die. I guess that group called PETA (People for the Ethical Treatment of Animals), would be having a problem right about then.

â€œSo there was hail, and fire mingled with the hail, very grievous, such as there was none like it in all the land of Egypt since it became a nation.

It looks to me like we have a problem here. God doesnâ€™t seem to be as concerned about the environment as some Christians are today.

When we go to the New Testament, there are also some plagues that we need to look at. Revelation 8:7-9 says,

It seems God might look at His creation just a little bit differently than we do.

And all of this doesnâ€™t include the many other plagues in the Scriptures, plus famines, and of course a worldwide flood. So what can we infer from all of this? One thing we know for sure is that the God of this universe is in complete control. He can decide if He wants to warm the sun up to warm things up here on earth, He can decide if He will allow a tsunami, or turn all waters into blood. The global warming experts of today predicted global cooling just 30 years ago. On the CBS Evening News, I saw Katie Couric quoting a study that the temperature here on earth would rise 7.2 degrees by the year 2100. Recently, I traveled to Iowa and checked the weather forecast five days in advance. They were off by ten degrees on the high, so if they canâ€™t give me the right temperature five days in advance, how can they give the right temperature 90 years in advance?

Christians out there do me a favor: Be careful in the coming days! I know Christians who are more concerned about the environment than anything else. We should all care about the environment, but there are things much more important than the temperature outside. Jesus didnâ€™t die so you could have a beautiful yard. Jesus didnâ€™t die so you would have perfect weather for Spring Break. Jesus died because the sins of mankind were, and are, repulsive to a holy God. Jesus died to atone for our sins. Jesus died so we didnâ€™t have to die in our sins. So go ahead and let Jesus worry about the environment. We need to be about the business of seeking and saving those who are lost. Jesus died for those people. Letâ€™s go reach them before they die and go to hell. Make sure you are not known for a beautiful yard in your neighborhood, but make sure you are known as the man or woman of God who cares where every soul in the neighborhood is going to spend eternity. Christians donâ€™t get persecuted because they care about the environment. Christians get persecuted because of their bold stand for Jesus Christ. I do hope some persecution comes your way this spring and summer. Your front yard looks great, but make sure your next door neighbor will be coming to heaven with you.