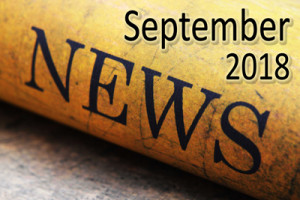 It sure seems like deception is all around us these days. The reason we sometimes think that way is because it is literally everywhere!

William Casey, the CIA Director under President Ronald Reagan for six years, became famous for a certain quote, which was his response to a question he was asked by the President. Here is the background of his legendary quote:

Ã¢â‚¬Å“As he did to all the other secretaries of their departments and agencies, Reagan asked what he saw as his goal as director for the CIA, to which he replied with this quote, which I recorded in my notes of the meeting as he said it.Ã¢â‚¬Â

I am always curious to learn about the goals of others. Their long-range plans can tell you a lot about them. What are they striving for? What is the purpose of their existence? Are they thinking in a temporal way or an eternal way?

From Mr. CaseyÃ¢â‚¬â„¢s reply, we can see what his goal was. Here is his famous quote: 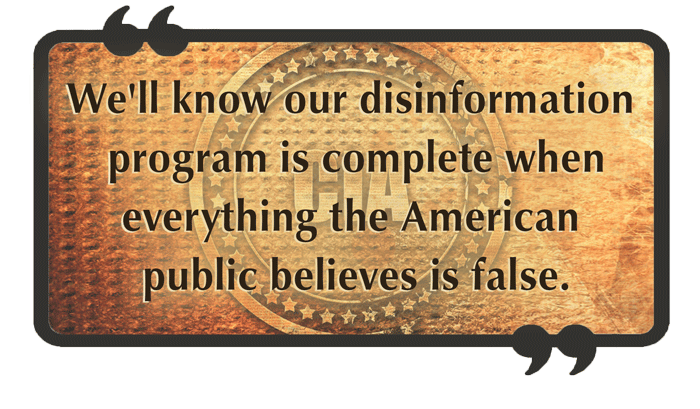 Now, this is really interesting to me. In this ministry, we deal with truth. We have to. Too much rides upon it. If you donÃ¢â‚¬â„¢t know the truth, you cannot make correct biblical decisions down here or make correct decisions about eternity.

One thing we all hate, in the long run of life, is when people lie to us. We hate when we find out that someone has deceived us. We thought we could trust that person, but then, we realized we could not.

We seem to have ingrained in us that we can trust our government, and they wonÃ¢â‚¬â„¢t steer us wrong. That would be nice, but fallen, human beings happen to make up the government.

First of all, what a terrible job that would be. I would never, ever want a job like that, no matter how much it paid. Secondly, it would make you wonder what else you could or could not trust about your government or about any government.

At least Casey was being honest! That is one good thing we can take away from his answer. He was honestly telling us it was his job to lie to us! Just think about that for a second.

His quote was made public at the time. Why wasnÃ¢â‚¬â„¢t it the biggest story being covered on the newscasts for weeks and months afterward? Or is it possible that the mainstream media is also in on the ruse to deceive the American people?

Ã¢â‚¬Å“Be not deceived; God is not mocked: for whatsoever a man soweth, that shall he also reap.

Ã¢â‚¬Å“He that walketh uprightly walketh surely: but he that perverteth his ways shall be known.Ã¢â‚¬Â

Ã¢â‚¬Å“Ye are ofÃ‚Â yourÃ‚Â father the devil, and the lusts of your father ye will do. He was a murderer from the beginning, and abode not in the truth, because there is no truth in him. When he speaketh a lie, he speaketh of his own: for he is a liar, and the father of it.Ã¢â‚¬Â

Ã¢â‚¬Å“Let no man deceive you with vain words: for because of these things cometh the wrath of God upon the children of disobedience.Ã¢â‚¬Â

Ã¢â‚¬Å“For he that will love life, and see good days, let him refrain his tongue from evil, and his lips that they speak no guile:Ã¢â‚¬Â

Ã¢â‚¬Å“And Jesus answered and said unto them, Take heed that no man deceive you.Ã¢â‚¬Â

And those are just a few of the verses that warn about deception! We may not take lying very seriously down here, but God takes it very seriously now and will take it seriously on the day we stand in front of Him.

None of us wants ill-gotten gain. Do things the right way. Do them the way that God wants them to be done. If you err, donÃ¢â‚¬â„¢t err on the side of deception. Err on the side of truth, and you can rest in knowing God will always take pleasure in that.

I was reading a book by Kevin Shipp calledÃ‚Â From the Company of Shadows.Ã‚Â He is a former CIA officer who wrote about the corruption in the CIA. I am intrigued by the deception that goes on in our government, so I wanted to see what he had to say. Now remember, in this ministry we TETE (Test Everything and Test Everybody). Shipp is a former CIA officer. That means he deceived people for a living! Some of what he wrote is really fascinating. So is he now telling the truth? That is something one has to decide when reading a book by a person like this.

He had a very interesting section on Mr. Casey that got my attention:

Ã¢â‚¬Å“After this meeting (Mr. Shipp was guarding the door of Mr. Casey when he was hospitalized), a fascinating event occurred. Chuck Colson, former White House Counsel and Watergate figure, now an evangelist and head of Prison Fellowship Ministries, was checked into the same hospital and had undergone major surgery for stomach cancer. As a nurse attended to Colson, she mentioned William Casey was in the same hospital and terminally ill. She asked Colson if he would like her to find out if Casey wanted prayer. Colson told the nurse he would. This nurse conveyed ColsonÃ¢â‚¬â„¢s message to Casey, asking if he would like Colson to pray with him. Casey responded that he did. Shortly thereafter, Colson visited Casey in his hospital room and the two prayed together. At the end of his life, William Casey became a Christian. It was an inspiring event. I am sure it was the subject of Sophia CaseyÃ¢â‚¬â„¢s prayers as she sat alone in the sunlit sitting room in their home. Those of you who are secularists will have to bear with me during this account. I hope I am not offending anyone. I have to accurately describe these events exactly as they happened.

After ColsonÃ¢â‚¬â„¢s visit, Bill Casey became a changed man. Formerly a gruff man who did not suffer fools lightly and regularly reprimanded the agents, or anyone else for that matter, for even small mistakes, he became a kind, gentle man. During his last days in the hospital, although he could not speak, he went out of his way to attempt to communicate to the agents and nurses how much he appreciated them and what they were doing. Some of the agents were shocked at the change. An agent, and close friend of mine, who accompanied him as he was transported back to his home in New York relayed to me Casey spent his last days requesting by gestures his nurse come into his room and read the Gospels to him as he lay in bed. On May 6, 1987, William Joseph Casey passed away in peace, leaving the legacy of a true American patriot.Ã¢â‚¬Â (Kevin Shipp,Ã‚Â From the Company of Shadows,Ã‚Â p. 46,47)

You know when Mr. Casey met Jesus, he regretted his life of deception. Deceiving others is no way to live. But the good news is the Lord Jesus Christ can forgive any of the deception or bad motives we have ever had. Remember, we are all one heartbeat away from eternity. Live a life of no regrets and completely enjoy that first face-to-face encounter with Jesus!

P.S.Ã‚Â This month, we are offeringÃ‚Â One Heartbeat AwayÃ‚Â at the lowest bundle and case prices we have ever had! Ã‚Â Check out the sale information below and be ready to give the lost reasons to believe!

Ã‚Â  People overseas and here at home are being equipped with truth! 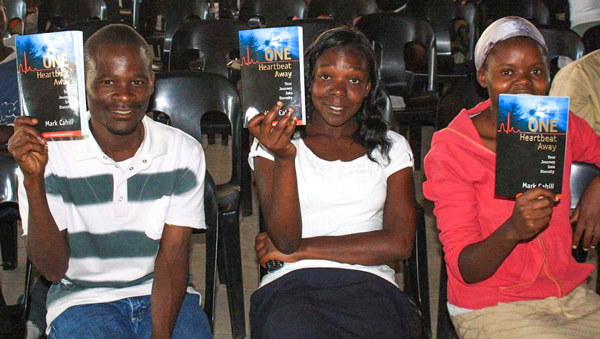 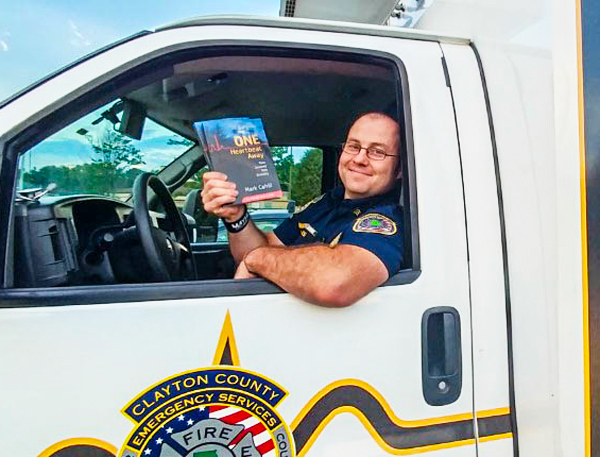