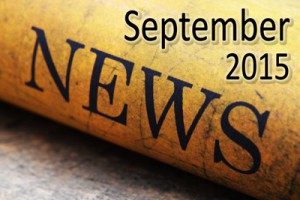 Drop of a Hat

Serious events seem to be happening at an amazing rate right now. People can be here one moment and off into eternity the next.

Matter of fact, you could just be doing your morning interview for TV; and little would you know, you were about to meet your Maker.

Ã¢â‚¬Å“Whereas ye know not what shall be on the morrow. For what is your life? It is even a vapour, that appeareth for a little time, and then vanisheth away.Ã¢â‚¬Â

Life might get so bad in your own country that you decide to become a refugee. You might plan to take your kids and leave, but you have no clue that today will be the day that eternity is staring someone you love in the face.

Ã¢â‚¬Å“Man is like to vanity: his days are as a shadow that passeth away.Ã¢â‚¬Â

I drove up behind a truck the other day, and it had a very big picture of a guy; and it said Ã¢â‚¬Å“In Memory OfÃ¢â‚¬Â¦Ã¢â‚¬Â So, at the next stoplight, I pulled up next to the guy. He rolled his window down. I said, Ã¢â‚¬Å“I saw the sticker for Patrick Brownlee on the back of your truck. Was he born again? Was he saved?Ã¢â‚¬Â The man looked at and told me that he was. But then, tears came to his eyes. Patrick was his twin brother. They were born three minutes apart. Patrick was 45 years old when he died.

He told me, through the window, that early in the morning on the day his brother died, he just felt deep within his spirit that something wasnÃ¢â‚¬â„¢t right. Then later that day he got the call from his mom that his brother had died. When he found out the time of his brotherÃ¢â‚¬â„¢s death, he realized it was the same exact moment the feeling had come over him earlier that morning.

I tossed a book to him through the window and encouraged him; and then the light turned green and we parted ways.

I took my mom to the eye doctor the other day. Started talking with Julie in the waiting room. She loves to read, and sheÃ¢â‚¬â„¢s been studying other religions. She believes that when she dies there is a Heaven, a Hell, and a purgatory. We had a fascinating talk. She was intrigued with the perfect blood sacrifice that Jesus provided for us. She now has two books in her hands that she said she intends to read. I know her encounter with God is coming, and it might come quickly. I am glad that I cared about her soul that day.

Mom was hungry after getting the bandages off of her eyes. ArenÃ¢â‚¬â„¢t moms always hungry?!! So I took her to lunch. We ended up buying the meals of the four guys sitting at the next table. An older man looked at me and said that he was on a trip out of OÃ¢â‚¬â„¢Hare one day. He had to fly standby; and finally after standing by for four flights, he got out.Ã‚Â  On the plane, he sat down next to a man who looked at him and said, Ã¢â‚¬Å“Glad you made the appointment.Ã¢â‚¬Â The older man had no clue what he was talking about. Then the guy told the older man that his mother had been praying for him and that no one can be right with God because of their mother. We must have our own faith to be right with God. The older man was stunned. What the guy had said was true. Then the older man said that the guy sat next to him for the whole plane flight and didnÃ¢â‚¬â„¢t say another word to him! NO!! DonÃ¢â‚¬â„¢t just sit there! Talk about sin, talk about repentance, talk about belief, talk about faith, and give him truth! That is what that man needed.

Ã¢â‚¬Å“Behold, thou hast made my days as an handbreadth; and mine age is as nothing before thee: verily every man at his best state is altogether vanity. Selah.Ã¢â‚¬Â

We received this email at the ministry the other day from someone who read the One Second After YouÃ¢â‚¬Â¦ booklet:

Ã¢â‚¬Å“Found this on the sidewalk on my way to lunch. Do you realize how dishonest it is? I suspect you do. Full of misrepresentation, half-truths and manipulation. If that is what it takes to Ã¢â‚¬Ëœsave soulsÃ¢â‚¬â„¢ you work for one pitiful God. Shameful.Ã¢â‚¬Â

Whichever one of you out there threw that booklet on the ground, thank you!! A man read it. It made him think. Made him think enough to shoot us an email.

Ã¢â‚¬Å“Boast not thyself of to morrow; for thou knowest not what a day may bring forth.Ã¢â‚¬Â

Ã¢â‚¬Å“And it came to pass that night, that the angel of the Lord went out, and smote in the camp of the Assyrians an hundred fourscore and five thousand: and when they arose early in the morning, behold, they were all dead corpses.Ã¢â‚¬Â

Life can turn on a dime. One hundred and eighty-five thousand soldiers in SennacheribÃ¢â‚¬â„¢s army thought they had more days to live, but they all passed over into eternity that night.

Ã¢â‚¬Å“And the archers shot at king Josiah; and the king said to his servants, Have me away; for I am sore wounded.Ã¢â‚¬Â

Josiah didnÃ¢â‚¬â„¢t know this was his day to meet our Lord, but it was.

What if you just wanted to train your hardest to perform your best in your favorite sport? What if your dream was about to turn into a nightmare and you didnÃ¢â‚¬â„¢t even know it?

Ã¢â‚¬Å“For we must needs die, and are as water spilt on the ground, which cannot be gathered up again; neither doth God respect any person: yet doth he devise means, that his banished be not expelled from him.Ã¢â‚¬Â

What if you decided to just go to a friendÃ¢â‚¬â„¢s wedding and have a wonderful time? What if eternity was staring you in the face, and you didnÃ¢â‚¬â„¢t know it?

Ã¢â‚¬Å“For he remembered that they were but flesh; a wind that passeth away, and cometh not again.Ã¢â‚¬Â

Life can change in a drop of a hat. Literally, in a New York minute. In a heartbeat. Death can catch us by surprise.

We donÃ¢â‚¬â„¢t want eternity to catch anyone by surprise. Are you ready to meet the King? Are you getting others ready for Judgment Day? Keep your eyes open. Things around us are happening at a quick pace. Life. Death. Eternity. Look up! Our redemption draweth nigh!!

Ã¢â‚¬Å“And that, knowing the time, that now it is high time to awake out of sleep: for now is our salvation nearer than when we believed. The night is far spent, the day is at hand: let us therefore cast off the works of darkness, and let us put on the armour of light. Let us walk honestly, as in the day; not in rioting and drunkenness, not in chambering and wantonness, not in strife and envying. But put ye on the Lord Jesus Christ, and make not provision for the flesh, to fulfil the lusts thereof.Ã¢â‚¬Â