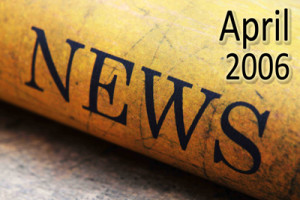 “I charge thee therefore before God, and the Lord Jesus Christ, who shall judge the quick and the dead at his appearing and his kingdom;

Preach the word; be instant in season, out of season; reprove, rebuke, exhort with all longsuffering and doctrine.

For the time will come when they will not endure sound doctrine; but after their own lusts shall they heap to themselves teachers, having itching ears;

And they shall turn away their ears from the truth, and shall be turned unto fables.”

Forty million copies of The Da Vinci Code, by Dan Brown, have been sold. The paperback version has just come out. The movie, directed by Ron Howard and starring Tom Hanks, opens on May 19th. The book is, and the movie will be, all the rage.

At the same time, I have gotten phone calls from people who say that as they have read this book, it has shaken their faith. Let us take a quick look to see if we are following truth or a fable.

The Da Vinci Code is a fiction book. That means not true. It can be found on the fiction list of The New York Times Bestseller List. However, what Brown does is very cleverÃ¢â‚¬â€right at the beginning of the book, he writes the word FACT and then lists some supposed facts. The author is telling you right up front that he is mixing fiction with what he purports to be fact. The problem is, how do you know which is which as you read the book? IsnÃ¢â‚¬â„¢t that what Satan did in the garden was mix a little bit of truth with a little bit of lie, and yet it sounded so good? That is always one of SatanÃ¢â‚¬â„¢s tricksÃ¢â‚¬â€to make a lie sound very appealing.

Basically, what is being perpetrated in this book and others like it is that Jesus got married to Mary Magdalene. Some are even saying that the wedding at Cana of Galilee was actually their wedding! They even make the claim that she was pregnant at the crucifixion of Jesus. Mary then had to escape from the persecution that would come, so she fled to France where she had the baby named Sarah. The bloodline of Jesus continued through the Merovingian dynasty of French kings, and the bloodline continues even to this day.

Brown writes in his book that it is a matter of historical record that Jesus married Mary Magdalene. What would be some good questions to ask at this point? Do you remember the chapter called Ã¢â‚¬Å“The Four Deadly QuestionsÃ¢â‚¬Â in One Thing You CanÃ¢â‚¬â„¢t Do In Heaven? How does he know that to be true? Where does he get his information? How does he come to that conclusion? Give me evidence! Anyone can make a statement, but what are you using to back up that statement?

“Have we not power to lead about a sister, a wife, as well as other apostles, and as the brethren of the Lord, and Cephas?”

Paul, who is considered one of the earliest of writers about the life of Jesus, wrote about men having the right to have wives, and bring them along with them. If Jesus had married, all he had to do was mention it right here, and it would have settled the whole issue. But, of course, he doesnÃ¢â‚¬â„¢t.

Can you see the other huge problem if Jesus had children? Do you think we would have any theological issues today because of that? People would have argued for 2000 years whether those kids were divine or not. I have met the kids of celebrities and seen how hard that can be. Can you imagine trying to grow up being physically related to Jesus and what everyone would expect?

Dan Brown also tries to get us to believe that in Leonardo Da VinciÃ¢â‚¬â„¢s, The Last Supper, the person next to Jesus is Mary Magdalene. That Da Vinci has basically encoded a secret message in his painting. Of course that opens the door to a few small problems. One of those would be, if that was Mary Magdalene, where is John then in the picture? It is one person short. And, by the way, what is the portrayer of eternal truthÃ¢â‚¬â€the Bible or a painting by Da Vinci? I will stick with the Bible even if Dan Brown wonÃ¢â‚¬â„¢t.

When Dan Brown writes on page 267, Ã¢â‚¬Å“The greatest story every told is, in fact, the greatest story ever sold,Ã¢â‚¬Â he lets everyone into his blatant anti-Christian bias. One of my faith-doubting callers said that Dan Brown claims to be a Christian. Anybody can claim anything, but his words let you know exactly what he believes.

One friend told me that as she read the book, Dan Brown made her feel smart. He made her understand concepts that she had never even heard of before. Who of us doesnÃ¢â‚¬â„¢t like to feel smart? But, we must feel smart by looking at truth, and not at fiction that someone wants us to think is truth.

The Da Vinci Code was based off a book called Holy Blood, Holy Grail. One of the authors was Michael Baigent. He was just on Dateline the other night. He has a new book that both he and Dateline were promoting, called The Jesus Papers: Exposing The Greatest Cover-Up In History. And what is the great claim that he makes? That Jesus did not die on the cross. The cross is a fraud, he says. Jesus wrote some letters, he was a husband and father; he survived the crucifixion, and so really didnÃ¢â‚¬â„¢t rise from the dead either. Mr. Baigent says he bases this on what the Bible says, and on two letters supposedly written by JesusÃ¢â‚¬â€that he cannot produce. And of course, what does the Bible say in 1 Corinthians 1:17-18:

“For Christ sent me not to baptize, but to preach the gospel: not with wisdom of words, lest the cross of Christ should be made of none effect. For the preaching of the cross is to them that perish foolishness; but unto us which are saved it is the power of God.”

Who is the fool here? Is it GodÃ¢â‚¬â„¢s word or is it Mr. Baigent?

This is going to be a great time to share our faith with many lost people. We can ask people, did you watch the movie or read the book? What did you take away from it? Did you gather anything spiritually from it? Did you think it spoke truth? Will it affect your faith in any way? Then also use the four deadly questions with them. Then we will be able to transition with them into the Law of God and the true Good News of the death, burial, and resurrection of Jesus. This will be a great time to get into conversations with them and plant seeds with the lost. I sometimes see people reading The Da Vinci Code in the airport, and I will sit down and strike up a conversation with them. If I see someone perusing it in a bookstore, I begin to talk with them. It is an easy way to get into a conversation about the real Jesus.

Two good resources to give someone who cannot see the real truth because of this book or movie are The Da Vinci Code: Fact or Fiction by Hank Hanegraaff and Paul L. Maier, and The Da Vinci Deception by Erwin Lutzer.