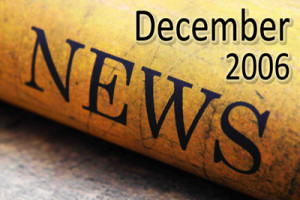 “Now the birth of Jesus Christ was on this wise: When as his mother Mary was espoused to Joseph, before they came together, she was found with child of the Holy Ghost. Then Joseph her husband, being a just man, and not willing to make her a public example, was minded to put her away privily. But while he thought on these things, behold, the angel of the Lord appeared unto him in a dream, saying, Joseph, thou son of David, fear not to take unto thee Mary thy wife: for that which is conceived in her is of the Holy Ghost. And she shall bring forth a son, and thou shalt call his name JESUS: for he shall save his people from their sins. Now all this was done, that it might be fulfilled which was spoken of the Lord by the prophet, saying, Behold, a virgin shall be with child, and shall bring forth a son, and they shall call his name Emmanuel, which being interpreted is, God with us.”

I think the Christmas season is one of the most wonderful times of the year. Friends and family get together. ThereÃ¢â‚¬â„¢s a little cold in the air down here in Atlanta. Time off from work is always nice, and itÃ¢â‚¬â„¢s always a joy to witness to all the lost people in the malls. And just in case we forget, this is the time of the year when many Christians celebrate the birth of the Lord Jesus Christ. But as you just read, I didnÃ¢â‚¬â„¢t begin the newsletter with that last sentence. It seems amongst the gift buying and giving, and football games, the Son of the Most High God can just get kicked to the curb as we are busy doing other things.

Not only that, there is one other problem at this time of year. When people do think about Jesus, who is that Jesus really? Is it this little cuddly Jesus that we would want to hug and put back in the manger, or is it the Jesus that died on the cross? One of the real tricks happening in our world today is the redefinition of who Jesus is. The same word, Jesus, is used, but it is being defined in a different way. That is what you find much more often in supposed Christianity- the same words, but a different definition. You may think you are talking to a solid Biblical believer in Jesus, but in reality, if you knew their definition for the words they use, you would realize they are not. That is why a great question to ask people is, What Do You Mean By That? By getting them to define terms, when you talk with them, you are on the same page.

Ã¢â‚¬Å“There is a veritable smorgasbord of Jesus Christs being served up to the public. Jesus warned of this and so did Paul, and weÃ¢â‚¬â„¢ve got them by the hundreds today (By the millions if you believe Shirley MacLaineÃ¢â‚¬â„¢s pronouncement that we are all Jesus Christs!)!

Who is the Jesus of JehovahÃ¢â‚¬â„¢s Witnesses? He is the archangel Michael. He was the first creation of God, he came to earth as a man, he died on a stake, and he rose invisibly as a ghost.

The Mormons say that Jesus was simply one god in a pantheon of gods. He is the brother of Satan, and the cross and blood of Jesus Christ are foolishness.

Sun Myung Moon and the Unification Church say that Jesus was a man who failed, and that Sun Myung Moon is the second coming of Jesus Christ.

The Bahais say that Jesus is one of nine great world manifestations. They say it does not matter what religion you believe, since all religions are basically the same.

The Bahai Temple in Evanston, Illinois, is nine-sided, with each side representing one of the worldÃ¢â‚¬â„¢s religions. They say it doesnÃ¢â‚¬â„¢t matter which door you come in, since all religions are basically the same. Big signs on the walls read, Ã¢â‚¬Å“All religions teach the same thing about GodÃ¢â‚¬Â.

The Unitarians say that Jesus was a good man but his followers mistakenly deified him (p. 143).Ã¢â‚¬Â

So you can see how Ron and Ed can write on page 144 of the same book,

There will be many false Christs and false prophets that will be in the world before the Lord Jesus returns. This is a big trick from Satan. Since he doesnÃ¢â‚¬â„¢t want us to believe in the real Jesus, why not give us a false Jesus to believe in that canÃ¢â‚¬â„¢t help us when they die? Since Satan is a great deceiver, this really makes sense.

So the question you must ask is do you know the real Jesus? You will find His beautiful description on the pages of the Bible. It would be a great idea this Christmas season to open up that book and devour its pages about the real Jesus. And once you know Him, will you share with people the real Jesus of the Bible this Christmas? They are dying to hear about Him. And oh yeah, they will be dying anyway. Make sure you have given them the choice to choose the Biblical Jesus before they die.

P.S. You can go to www.christianministriesintl.org to look at the book Fast Facts on False Teachings and other products by Ron Carlson. He is one of the soundest men of God I have run into in a while, and his material is right in line with the Bible. I highly recommend his teachings and products.