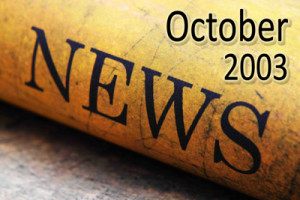 Woe Is Me If I Do Not Preach The Gospel

Ã¢â‚¬Å“For though I preach the gospel, I have nothing to glory of: for necessity is laid upon me; yea, woe is unto me, if I preach not the gospel!Ã¢â‚¬Â

I had a great time speaking in Florida a couple of weeks ago. Lots of hungry hearts of Christians who want to share their faith boldly. I have already been getting reports of teenagers boldly sharing their faith on their high school campuses. Boldness comes from the Lord, and is a great thing to pray for.

While I was in Florida, I learned that Charles Barkley and Tiger Woods would be about half an hour away filming a commercial for Nike. I know Charles from college, so I decided to swing by where they were shooting.

I knew there would be a lot of security with the shoot, and I wasnÃ¢â‚¬â„¢t sure how I was going to get through to meet up with Charles. So as I was driving over there, I prayed. Praying really works, if you donÃ¢â‚¬â„¢t know that! As I pulled up to the resort and talked to the security guard, another lady went over to the phone, I assume to call and see if I was on the list. Of course, I wasnÃ¢â‚¬â„¢t, so I called her over to my car to chat with her, then I asked her the question, Ã¢â‚¬Å“Shawn, if you died tonight, are you 100% assured that you would go to heaven?Ã¢â‚¬Â She explained that she loved the Lord, teaches a Bible study class, etc. I mentioned that I wrote a book and she said she wanted a copy. As I gave her one, the other security guard, who was not a believer, wanted a copy! Pretty cool. Then Shawn got in her car and had me follow her over to where the commercial was being filmedÃ¢â‚¬â€right through the security!

When I got to the set, Charles was in his trailer so I hung out with him and some others while we waited for the shoot. Suddenly the door opened, and a tall, long silver-haired, 65-year-old man walked in. Charles introduced him as Joe, the director of the commercial. I recognized him as one of the most famous commercial directors in the world. Several of his commercials had aired during the Super Bowl. I had seen a special about him on a newsmagazine show, and he was one of the most arrogant, angry men I had ever heard. Although he is going through a divorce, which he said is tough on him, I didnÃ¢â‚¬â„¢t think that was where his anger was coming from. I felt it was anger toward God, which I was about to discover.

As we were sitting in the trailer, he asked each of us what we did. When I answered that I was in town to speak for the Fellowship of Christian Athletes, he replied, Ã¢â‚¬Å“YouÃ¢â‚¬â„¢re not one of those, are you?Ã¢â‚¬Â For the next several minutes, he criticized Christians. Then he said he wanted to play me in a game of one-on-one basketball! Tiger wanted to get the shoot going, but his director wanted to play basketball! I think the reason this 65-year-old man wanted to play me one-on-one is that he wanted to beat up on a Christian. I took the time to witness to him as we played, asking questions to make him think. I finally put him out of his misery and beat him so he could start shooting the commercial!

When we got over to the tee box, Charles introduced me to Tiger Woods who smiled and walked on. You know meÃ¢â‚¬â€I had to find someone to talk with while they were shooting the commercial, so I started talking with a guy who was TigerÃ¢â‚¬â„¢s body double. He explained that when there is a hand shot or a shot of Tiger from a long-distance, it is actually him! Richard really needed a challenge to start standing up for what he believes.

I then talked with Vince Coleman, a tremendous baseball player who had played several years with the New York Mets. He said he goes to church every Sunday, and he wanted my book to read that night in his hotel. He had just arrived in Orlando to work with the Atlanta Braves on their base running. I told him that I thought I was there that day to witness to Tiger, but maybe the reason I was there was to challenge him to boldly stand up for Jesus with his friends.

Every few minutes during this time, Joe, the commercial director, would fire questions at me to try to antagonize me. Really, Satan was trying to mess with me while I was doing the LordÃ¢â‚¬â„¢s work. One time Joe said, Ã¢â‚¬Å“Jesus could not be the Son of God because He was not a vegetarian.Ã¢â‚¬Â I smiled. He said the Son of God would not have killed another creature. He had mentioned some Indian beliefs earlier, so I was pretty sure that he worshiped the creation and not the Creator. I told him, Ã¢â‚¬Å“Jesus made fish. He can eat one if He wants to!Ã¢â‚¬Â

When they finished part of the commercial, people walked up to Charles and Tiger to get autographs. Tiger was signing something for some folks, and as I approached, it was like God parted the Red Sea and everyone walked away, leaving just me and Tiger.

I told him that I had written my first book and wanted to sign a copy for him, so he pointed out his assistant for me to give the book to. As we began to walk off of the tee box, I knew I was supposed to do more than just give him my book. I clammed up and got nervous. Does that ever happen to you when you know you are supposed to share your faith? Guess what? It happens to me too! The question is, will I let the fear of man or my love for God win out in this situation? I had been praying for a chance to witness to Tiger Woods. Here it was, and it wasnÃ¢â‚¬â„¢t happening. I got the feeling from the Lord that this is what IÃ¢â‚¬â„¢d been praying for, so I needed to go for it.

As we were walking I said, Ã¢â‚¬Å“Tiger, I have always wanted to ask you a question.Ã¢â‚¬Â He replied, Ã¢â‚¬Å“Go for it.Ã¢â‚¬Â I asked, Ã¢â‚¬Å“When you die, what do you think is on the other side? What do you think is out there when we walk out of here?Ã¢â‚¬Â Tiger stopped dead square in his tracks, looked up at me and said, Ã¢â‚¬Å“I donÃ¢â‚¬â„¢t know.Ã¢â‚¬Â I responded, Ã¢â‚¬Å“Whether it is Payne Stewart dying, John Ritter, or Johnny Cash, we all think about these things.Ã¢â‚¬Â (Payne was a famous golfer who died a couple of years ago, and I knew that Tiger had gone to his funeral.) He was nodding his head.

When I explained that CharlesÃ¢â‚¬â„¢s brother had a near-death experience in which he saw a lake of fire, TigerÃ¢â‚¬â„¢s eyes grew wide. He couldnÃ¢â‚¬â„¢t believe someone saw that. So I told him that he could find out where he will be spending eternity.

I then said, Ã¢â‚¬Å“Tiger, you just told me that you are a liar, a thief, an adulterer, and a murderer by that standard. Would you be guilty or not guilty on Judgment Day?Ã¢â‚¬Â He looked at me and said, Ã¢â‚¬Å“Guilty.Ã¢â‚¬Â Ã¢â‚¬Å“Would that mean heaven or hell?Ã¢â‚¬Â He answered, Ã¢â‚¬Å“Probably hell.Ã¢â‚¬Â Now, of course, this is where you share about repentance and how the blood of Jesus can cleanse of all sin. Right at that point, someone walked up and told Tiger that they needed to move to the next place to finish the commercial. Tiger began to walk off the tee box and that was about to be the end of my conversation. So I told him that I would give my book to his assistant, and I added, Ã¢â‚¬Å“Where we stopped, that is where repentance and Jesus fit in. Have a great day.Ã¢â‚¬Â And that was it.

As they went to the next hole, Joe saw me giving books to a couple of people, and he told them, Ã¢â‚¬Å“DonÃ¢â‚¬â„¢t read that trash.Ã¢â‚¬Â I told Joe that I enjoyed chatting with him. He wouldnÃ¢â‚¬â„¢t shake my hand, but he ended up hugging me goodbye. Go figure.

Please pray for Richard, TigerÃ¢â‚¬â„¢s double, to get back to what he was taught as a kid. Pray for Vince Coleman to boldly stand up for his beliefs with the famous people he is friends with. Pray for Joe; I think I want to see him saved more than anyone I have met in a long, long time. Pray for TigerÃ¢â‚¬â€that people would stop treating him like a god, and for him to realize that he needs One. And donÃ¢â‚¬â„¢t forget, woe to each one of us if we donÃ¢â‚¬â„¢t preach the gospel.