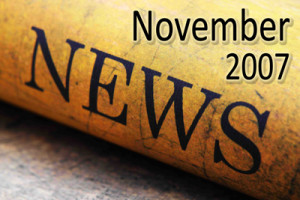 As we enter this season of Thanksgiving, we all have a lot to be thankful for.

Ã¢â‚¬Å“Enter into his gates with thanksgiving, and into his courts with praise: be thankful unto him, and bless his name.Ã¢â‚¬Â

Do you ever thank God for your family? I have met two different people in the last couple of weeks who were not being raised by their parents. One, a 17 year old, told me that he lived with his brother. His divorced parents live in California. Another guy told me that his Mom died as she was giving birth to him, and his Dad left him when he was 16 years old. He moved away to Canada. So, for the last two years of high school, he bounced around from friendÃ¢â‚¬â„¢s homes each week to sleep. He told me that he didnÃ¢â‚¬â„¢t like to spend more than a week at a time anywhere because he didnÃ¢â‚¬â„¢t want to wear out his welcome. No matter how dysfunctional your family is, and they are all dysfunctional in some way, isnÃ¢â‚¬â„¢t it nice to know there is a roof above your head tonight?

Ã¢â‚¬Å“In every thing give thanks: for this is the will of God in Christ Jesus concerning you.Ã¢â‚¬Â

Do you ever thank God for the freedoms that you have to stand up for your belief in the Lord? We are losing those rights here in America and many of our brothers and sisters in other countries have already lost those rights.

Do you ever thank God for persecution? Recently, I was doing a radio show that originated from Toronto. A lady on the station said, Ã¢â‚¬Å“if you would witness the way you do in America up here, you would be torn apart.Ã¢â‚¬Â I said, Ã¢â‚¬Å“According to Hebrews 11, why would that be such a bad thing?Ã¢â‚¬Â So many people are concerned about how we look in otherÃ¢â‚¬â„¢s eyes and it just doesnÃ¢â‚¬â„¢t matter when we die. Please the Lord. He judges all things.

Ã¢â‚¬Å“To the end that my glory may sing praise to thee, and not be silent. O LORD my God, I will give thanks unto thee for ever.Ã¢â‚¬Â

Do you just thank God when you eat a meal, or do you really THANK Him for that meal? IsnÃ¢â‚¬â„¢t it nice to know that you get to choose to fast, when others have to fast because there is no food?

Do you ever thank God that you know there is only one way to heaven and you know what that way is? I had lunch with a Nation of Islam follower named Rodney Muhammed. I met him because he regularly sells newspapers on the same street corner. So I always invite him over to my car to talk. We had lunch one day and he let me know that he believes there are many paths to God. LetÃ¢â‚¬â„¢s just say I didnÃ¢â‚¬â„¢t agree with that!

Do you ever thank God that you can read? I just read where 60% of the world cannot read. This is one reason we are paying for translations of the New Testament into audio of different languages. We do this so we can reach those people for the Lord as well.

Ã¢â‚¬Å“Praise ye the LORD. O give thanks unto the LORD; for he is good: for his mercy endureth for ever.Ã¢â‚¬Â

Do you ever thank God for friends? I met a guy the other day that just cried on my shoulder because he was so lonely.

Do you thank God for the job you have? Do all that you do for the glory of God. When He moves you to another job, great, and if He keeps you in this job for a long time, great. Either way, glorify the Lord.

Do you ever thank God that you donÃ¢â‚¬â„¢t have to produce your own tracts to hand out? IsnÃ¢â‚¬â„¢t it great that someone else has done that for you? You can find good tracts at:

I received an email from a guy that said,

Ã¢â‚¬Å“I stood in front of a book display around 3 or 4 yrs ago and asked the Lord to direct me to a book that would inspire. There was one copy only; and it caught my eye. Evangelism sections are never big.Ã¢â‚¬Â

Do you ever thank God for that perfect book or sermon you hear at the right time, just when you and your soul need it?

Just received an email from a church where I spoke recently. They said,

Ã¢â‚¬Å“PRAISE GOD Testimony: In the past 225 days there have been over 150 evangelism testimonies shared in daily emails from 92 different people.Ã¢â‚¬Â

This church began collecting stories of the obedience of their people who had been faithfully sharing the Gospel. We should thank God for the people and opportunities He puts in front of us. Faithfully share the Gospel and let Him worry about the results. He does a great job at that. You just need to be faithful.

Ã¢â‚¬Å“Now thanks be unto God, which always causeth us to triumph in Christ, and maketh manifest the savour of his knowledge by us in every place.Ã¢â‚¬Â

An inmate emailed me from a halfway house and said,

Ã¢â‚¬Å“I participated in the study for this book while incarcerated at Skyline Correctional in Canyon City, Colorado. Currently I am in a half way house in Denver and providing the clients there with structured bible studies. Currently we are doing the Truth Project DVD study distributed by Focus on the Family out of Colorado Springs.Ã¢â‚¬Â

Do you ever thank God for inmates? Being incarcerated is a time when many peopleÃ¢â‚¬â„¢s lives finally slow down enough to think about eternal matters.

Do you ever thank God when life is smooth and there seemingly arenÃ¢â‚¬â„¢t any problems? I was talking with a Marine named Antoine on the train the other day. He joined the military and four months later was in Afghanistan. He has seen a lot in his short time in the service. I asked him why he joined the service. He said, Ã¢â‚¬Å“My girlfriend was in the second plane that hit the towers on 9/11.Ã¢â‚¬Â That event sent a ripple effect through his and his familyÃ¢â‚¬â„¢s life that has gotten him to the point where he is today.

A Russian friend sent this to me:

Ã¢â‚¬Å“And of course greatest news came from the womenÃ¢â‚¬â„¢s prison camp from the Far East of Russia. One lady Tanya who is doing her third sentence for a murder and who used to be a trouble maker violating rules became a Christian after reading your first book! Administration and prisoners alike all see the difference in her life! She is plugged into the small fellowship that the have there. ItÃ¢â‚¬â„¢s so cool, Mark! I still didnÃ¢â‚¬â„¢t give up with an idea of sending your book to every prison camp in Russia so I need more of contact info, which IÃ¢â‚¬â„¢ll try to get.Ã¢â‚¬Â

Can you just imagine that whole scenario taking place? A triple murderer becoming born again in a Russian prison!

By your donations to the ministry, we were able to help pay for the printing of the book into Russian. That testimony above is a direct result of your giving. They have just finished One Heartbeat Away in Russian, and it will be ready to print it in a few weeks. Praise the Lord.

Ã¢â‚¬Å“First, I thank my God through Jesus Christ for you all, that your faith is spoken of throughout the whole world.Ã¢â‚¬Â

So letÃ¢â‚¬â„¢s end this newsletter the way we should have started it. Is anybody out there thankful to the Lord Jesus Christ in that He died and rose again just for you and me? Is anybody out there excited enough to go tell someone about the great news of what He has done? LetÃ¢â‚¬â„¢s be so thankful to the Lord for the redemption of our sins by His blood, that we will not only go tell some, but that we will go tell all the truth of His Gospel.