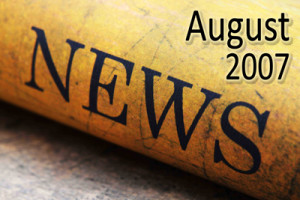 Would the World Be Better Off With Another You?

Ã¢â‚¬Å“Be ye followers of me, even as I also am of Christ.Ã¢â‚¬Â

Well letÃ¢â‚¬â„¢s take that concept a step further. As you know we talk a lot about evangelism at this ministry and reaching the lost. The truth of the matter is though that as you witness, you are an ambassador of Christ. You are really replicating yourself. You bring them the truth of Jesus Christ, and at the same time you bring them you and how you are living your life.

So letÃ¢â‚¬â„¢s say we took you and your family and we placed you in a city in a different country or even in a remote area of a country that has never heard of Jesus before. So not only did they get to hear you talk about Jesus, but they also got to watch you to see your commitment to Jesus and how that is actually lived out. So if they replicated what they saw and heard what would those new believers look like?

Would talking about things of the world flow off of their lips as easy as singing to the Lord?

Would they have learned new curse words because you also use those when you talk?

Would their new church be this really impressive building without really humble people inside?

Would they now need a lot of rock and roll music in order to worship the Lord?

One church that I went to on a Sunday had a very heavy rock band playing, a light show, a disco ball light, and there was fog running off of the stage into the audience. Trying to bring the world into the church to entertain people will never work with those people and it most definitely will not work with God.

Will that churchÃ¢â‚¬â„¢s new youth group be all excited about the pizza, yo-yoÃ¢â‚¬â„¢s, and roller coasters you talk about, that they canÃ¢â‚¬â„¢t seem to find in their own country?

Some friends of mine were recently witnessing at a Marilyn Manson concert. They told me that they met a lot of kids from this one youth group going to the show. What parent or youth group leader has not instructed their teenagers with enough biblical doctrine that we should be running away from that evil and not running to it? Or is it that the teens see their parents and youth leaders involved with enough secular TV, movies, DVDÃ¢â‚¬â„¢s, and music that their lifestyle is just replicating those above them in their line of authority?

Will these new believers want to go find other supposed Christian books to read or will they have a hunger to learn the truths of God straight from the word of God?

Speaking of truths, will these people that look like you have good strong biblical doctrine to base their life on or will they be basing their lives on ever changing moral relativistic teachings? Will their faith be firmly planted on rock or on quicksand?

Would looking for a TV so they can find ESPN and other shows be what they now do to fill up their extra time to kill the boredom that can come with life?

Would prayer be an important part of their lives now or just an afterthought?

Would these people now be generous givers or would these folks be some of the stingiest people with their money that have ever existed?

But the truth of the matter is you donÃ¢â‚¬â„¢t have to go to another country to find this out. You are actually replicating yourself right where you are at right now. If you are a parent, you can be rest assured that your kids do and will look a lot like you in the coming days. The people you hang out with and fellowship with will also be likeminded. So truly before we go somewhere else to go bring them our version of Christianity, letÃ¢â‚¬â„¢s go ahead and get our house in order, repent of any of those sins, and start replicating others to look like us right here and right now.

Oh by the way, this wasnÃ¢â‚¬â„¢t the easiest email for me to pen. Some of those above statements were very easy to write because Satan has also tricked me in certain areas too.

P.S. Someone sent me a link to this video. It is only three minutes. I hope it encourages you and challenges you to be bold and to be practicing!