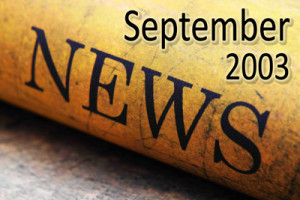 Ã¢â‚¬Å“And they departed, and went through the towns, preaching the gospel, and healing every where.Ã¢â‚¬Â

On August 22, I spoke to about 1,500 teens and adults at a big kickoff event to prepare the youth to take their campuses for Jesus Christ. When I went to my hotel after the event, I stopped at the front desk to request a wake-up call for the next morning. I asked the man behind the desk the question: If you died tonight, are you 100% assured that you would go to heaven? He replied that he wouldnÃ¢â‚¬â„¢t be going there because he didnÃ¢â‚¬â„¢t believe in a heaven. I asked him what he believed in. He said he didnÃ¢â‚¬â„¢t have time to talk because he had to get back to his partner on the phone. Ã¢â‚¬Å“PartnerÃ¢â‚¬Â is a term homosexuals use to describe their homosexual lover. Then he picked up the phone and said, Ã¢â‚¬Å“Honey, I am back.Ã¢â‚¬Â I just handed him a tract and went to my room.

The next morning as I was getting ready to leave the hotel, I glanced at the front desk and saw a different guy. I thought about not witnessing to him because of what happened the night before. Even I hesitate at times when it comes to sharing my faith. The question is whether weÃ¢â‚¬â„¢ll be obedient or whether weÃ¢â‚¬â„¢ll let Satan keep us in our comfort zone. I walked over and started a conversation with the guy, whose name was Art. After answering a few questions he said, Ã¢â‚¬Å“Why are you asking me this stuff?Ã¢â‚¬Â I explained that I was a Christian and that I wanted to see him in heaven one day. He told me that he was from Russia, and that his sister had gotten into Christianity. He was very hungry for truth, wanted to read my book, etc. I was so glad that I didnÃ¢â‚¬â„¢t wimp out that morning. Please pray for the salvation of ArtÃ¢â‚¬â„¢s soul.

Off to the airport I went. When I was checking in, I asked Andy behind the counter if he went to church. He said, Ã¢â‚¬Å“Why do you ask?Ã¢â‚¬Â I replied that I was a Christian and that I wanted to see him in heaven one day. He told me that he was a wayward Christian, so I asked what that meant. He said he was more into spirituality nowÃ¢â‚¬â€the kind where you can create your own religion. Interesting answer. He said he was a minister in the Universal Life church. He knew the Scriptures pretty well, but knowing them and believing them are very different things. We had a good ten-minute talk at the counter. He took my book and said he would read it. Please pray for the salvation of AndyÃ¢â‚¬â„¢s soul.

The day had been very interesting at that point. I walked into a magazine shop and saw a guy who was covered with tattoos. I have always enjoyed conversations with folks who have tattoos and body piercings. I overheard a woman ask him if he was Vanilla Ice (a rap artist from a few years ago). He was, so she took a picture with him and got an autograph. When he walked out of the shop, I started to talk with him. At one point I mentioned, Ã¢â‚¬Å“I heard that you had gotten into Christianity.Ã¢â‚¬Â He said, Ã¢â‚¬Å“I used to be into that.Ã¢â‚¬Â He had a cross tattoo on one arm and Ã¢â‚¬Å“the sacred heart of JesusÃ¢â‚¬Â on his chest. Remember, you can never Ã¢â‚¬Å“used to be intoÃ¢â‚¬Â the Son of God; you either love Him or you donÃ¢â‚¬â„¢t. When I asked what he was into, he replied, Ã¢â‚¬Å“I am into Scientology now.Ã¢â‚¬Â I asked how he got into that, and IÃ¢â‚¬â„¢ll never forget his response: Ã¢â‚¬Å“John Travolta had a talk with me.Ã¢â‚¬Â Think about that for a minute. John Travolta will share his faith, but how many Christians know that Jesus is the only right answer for eternity, but wonÃ¢â‚¬â„¢t share their faith?

As we talked, he was trying to quote the Bible but didnÃ¢â‚¬â„¢t know what it said. ThatÃ¢â‚¬â„¢s why we need to know what weÃ¢â‚¬â„¢re talking about, so we can share the truth with others. I walked him through the Ten Commandments. He said, Ã¢â‚¬Å“Wait a minute. All of us have lied. All of us have stolen something.Ã¢â‚¬Â He argued that we all have free will. Exactly. But when we break the laws of God with our free will, that is foreign to a holy, righteous, pure God.

I signed a copy of my book for him, and mentioned some things that I thought he would like to read in it. He owns a skateboard shop on South Beach, so I pointed out the first chapter which is titled Ã¢â‚¬Å“South Beach.Ã¢â‚¬Â We had a great talk. He was thankful for the book, but we had to board our plane.

During the flight, I sat next to Milton. Milton said he was a pastor who worked at a jail, but I still witnessed to him and asked him questions. He later mentioned he was very encouraged that I didnÃ¢â‚¬â„¢t just assume he knew the Lord, but that I wanted to find out. Think about that. We prayed on the plane for Vanilla Ice and other things. He has seen 52 people come to Christ at that jail. Please pray for the continued boldness of Milton.

Once off the plane, I wanted to talk to Vanilla Ice a bit more so I walked up to him and helped him find his next gate. As we continued to talk about spiritual things, he told me that even if this Jesus thing winds up being true, he would still be okay. I asked him how that would happen. He answered that all the good things he did would outweigh the bad that he had done. Because he mentioned earlier that he had read some of the Koran, I told him if the Koran were true, Allah would weigh out his good and bad deeds. But the God of the Bible was too holy for that and He would judge all of our sins. Vanilla Ice (Rob) told me he was into science, and he was definitely a thinker. I said I had some good science information to send him to show the truth of the Bible, so he gave me his address. He was very open and great to chat with. Please pray for the soul of Rob.

Bottom line: DonÃ¢â‚¬â„¢t let John Travolta out-witness you. You are backed up by a resurrected Savior. He stood for you on the cross; make sure that you stand for Him with your life.