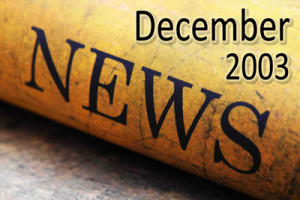 Ã¢â‚¬Å“And as it is appointed unto men once to die, but after this the judgment:Ã¢â‚¬Â

I hope you and your family had a great Thanksgiving. We are to be thankful in all circumstances, and we all have much to be thankful for. If you donÃ¢â‚¬â„¢t feel that way, take time to think about all the many blessings you have been given.

On a flight to Dallas recently, I sat next to a guy with a great French accent who lived in San Francisco. He was born in France, but has lived in the States for 15 years. We had a good time talking about life and the things of God. Although he wasnÃ¢â‚¬â„¢t a believer, he was very open and had a lot of questions. After we talked awhile, he said that he had to get some work done, but he wanted to tell me a story later.

Shortly before we landed, Olivier said he had something to tell me. Six months earlier, his father had died. His father lived in France, and because of the time change, Olivier didnÃ¢â‚¬â„¢t find out until about 12 hours later. When he woke up that morning, he explained, he fell back into that in-between state of sleep. He told me about a vision he had of a guy talking to him. The guy seemed like a televangelist, but so much more. He had white hair, and Olivier knew that the guy was trying to tell him about God, but he couldnÃ¢â‚¬â„¢t hear him. I asked him why he couldnÃ¢â‚¬â„¢t hear, and he said it was because he didnÃ¢â‚¬â„¢t want to listen.

He then said that the scene changed to a big theater-like setting. This same figure was standing on the stage with a lot of people in front of him, and the people were walking up to him one at a time. Watching from the back of the theater, Olivier could only see the man from behind, but the figure had long, white, flowing hair and a long, white, flowing robe. Olivier knew this scene was important.

I pulled out my Bible and showed him Acts 2:17, which says that in the last days young men will see visions and old men will dream dreams. I have heard amazing stories of dreams that people have had, and I believe God was trying to reach this nonbeliever through his dream. I showed Olivier Revelation 1:14, which describes Jesus: Ã¢â‚¬Å“His head and His hair were white like white wool, like snow.Ã¢â‚¬Â Mark 9:3 states that when Jesus was transfigured on the mount, His clothes were exceedingly white.

I told Olivier that I believed he saw a vision of the Lord whom he will stand in front of one day. I asked him, Ã¢â‚¬Å“Are you ready to stand there? Your dad stood there, I will stand there, you will stand there,Ã¢â‚¬Â and so on. Judgment is coming for all. The question is, are we ready and are we helping others to get ready for that day? Please pray for Olivier, and for other lost people you know. Then go talk to them.

Several people have ordered copies of One Thing You CanÃ¢â‚¬â„¢t Do in Heaven as Christmas presents for friends, which I thought was a great idea. That might be something you would like to do alsoÃ¢â‚¬â€to give your saved friends some tools and encouragement to reach the lost. I donÃ¢â‚¬â„¢t say that to sell you a book, but so all of us as believers will be doing the work of the Lord.

Have a great December. The malls are full of lost people who love to buy gifts. Be bold to tell them about the greatest Gift ever!