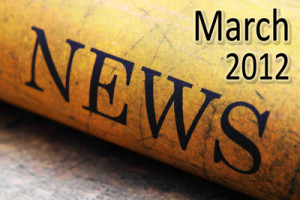 As Joshua and the Israelites were going about GodÃ¢â‚¬â„¢s business of taking the land that He had promised them, something very interesting happened along the way.

Ã¢â‚¬Å“So there went up thither of the people about three thousand men: and they fled before the men of Ai. And the men of Ai smote of them about thirty and six men: for they chased them from before the gate even unto Shebarim, and smote them in the going down: wherefore the hearts of the people melted, and became as water.Ã¢â‚¬Â

So here they were conquering and taking territory, and there were no problems. But all of the sudden, they had all of this fear. That is interesting to think about. What do you do when fear comes upon you?

I found a website that listed peopleÃ¢â‚¬â„¢s top ten fears, and this is what it listed:

Do any of those fears ring a bell? Considering that I dropped out of my college public speaking class, I know the feeling of number two! Would that be on your top ten list if someone asked you?

But when the Israelites looked back at the men of Ai, it wasnÃ¢â‚¬â„¢t that they were just fearful, it was that their hearts melted as if they were like water! That is a whole different level of fear. That is the fear that will make you not want to do something ever. You would avoid it like the plague. What could fall into that category? Is it public speaking for you? Maybe someone pulling a gun on you?

Ask yourself a question: Would the fear of witnessing to a lost person show up on your top ten list? Why is it we get so fearful when we are commanded by God to reach the lost?

Remember that great verse in 1 John 4:4:

Ã¢â‚¬Å“Ye are of God, little children, and have overcome them: because greater is he that is in you, than he that is in the world.Ã¢â‚¬Â

Do you remember Who you serve? Do you remember how great our God is? A friend said to me one time, Ã¢â‚¬Å“Why is it that when we are in church that God is so big, and Satan is so small? But when we are out witnessing that Satan is so big, and God is so small?Ã¢â‚¬Â He said, Ã¢â‚¬Å“Did God change?Ã¢â‚¬Â Of course not, but our view of God changed. You see, if we keep the right focus on God, the things of the world and the fears of the world just seem to fall by the wayside.

I had a great talk with 17-year-old David in a mall in Detroit the other day. He told me that he did not grow up with his dad. Dad left when he was two weeks old. He had a lot of anger towards his dad. I asked him if he could do one thing with his dad, what would it be? He didnÃ¢â‚¬â„¢t even hesitate. He said, Ã¢â‚¬Å“A family dinner, with my mom, my dad, and me!Ã¢â‚¬Â What an answer. Be careful parents: DonÃ¢â‚¬â„¢t try to buy your kids. They really just want you. We had a great talk about forgiving his dad for what he had done, and then about the forgiveness Jesus offers for things we have done.

In another mall in Detroit, I ran into Scott. We had this really neat talk about life and death. I was speaking at a menÃ¢â‚¬â„¢s conference that night, so I asked him what he thought the best thing that he had ever done for his seven-year-old son, Ethan, was. He said, Ã¢â‚¬Å“We have a one hour talk every night before he goes to bed.Ã¢â‚¬Â My jaw about hit the floor. At first, I didnÃ¢â‚¬â„¢t believe him, but he was very serious. He even said his son is turning out like him, in that he is so caring for the other students at his school, and will go and sit with someone at lunch that is sitting by themselves, etc. Can you just see the relationship that those two are going to have in the coming years?!

I am so glad I am beginning to understand how big our God is and that we donÃ¢â‚¬â„¢t have to fear men or fear rejection when we are reaching the lost for the Lord.

But also donÃ¢â‚¬â„¢t forget why the men died as they were taking Ai. God was truly not with them during this battle. Why? There was sin in the camp. Achan took things that were not his, and it kindled the anger of our Lord against the Israelites. Not only did it cost those men their lives as they tried to take Ai, at the end of the chapter, weÃ¢â‚¬â„¢re told the cost to Achan as well. All that Achan stole, his sons, daughters, and all his possessions were stoned and burned with fire. Sin has a heavy price tag. Can you think of anything you need to repent of before GodÃ¢â‚¬â„¢s anger is kindled against you? Is anyone glad that God gives us second chance after second chance after second chance in this lifetime?

Until your very last breath, never forget how big our God is and how little Satan is compared to Him! Be bold!!