Â  Â  Â Elton John passed through Atlanta recently on his Farewell Tour. Man, he has been around for a while! So I went downtown to do some witnessing the night of the event.

Â Â Â Â  As I was handing out tracts to the folks going in, I noticed a lot of people would not take one. That happens, sometimes, at events where the crowd is more on the â€œrichâ€ side. For many of them, money is their god and their $100 tickets become their status symbol. I typically say, â€œDid you get one of these?â€ and most times, people will take a tract. However, this time, there were a lot of hard hearts that just looked down and passed me by. So, I changed my strategy a little bit. I started saying, â€œMerry Christmas,â€ and then a few more people started taking tracts. 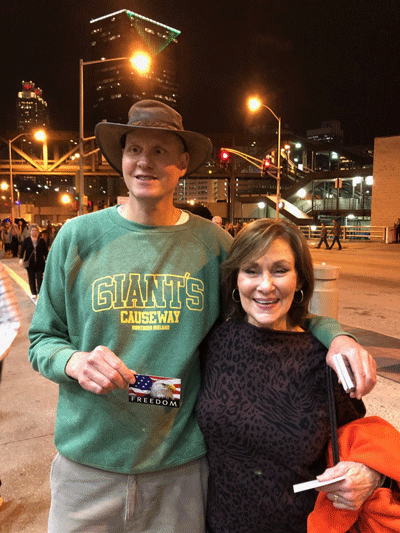 And when they heard of the resurrection of the dead, some mocked: and others said, We will hear thee again of this matter.

Â Â Â Â  When you talk about eternal truth with people, you will get all kinds of reactions. But no matter what the reaction is, our job is to give them the truth they need to prepare for the moment they die.

Â Â Â Â  One guy answered, â€œTwice!â€ I let him know that we only have to be saved once, according to the Bible.

Â Â Â Â  I had a couple of people tell me they were Jewish. So I asked them, â€œDo you think Jesus, Yeshua, is the Messiah?â€ That question started two really interesting conversations. Good seeds were planted.

Â Â Â Â  During a lull in the action, I got into an amazing discussion with a guy standing on the sidewalk with his luggage! He wouldnâ€™t take a tract, so I just started talking. He actually worked for the stage crew who built the stage set. He had just flown in and was waiting for his Uber driver. He couldnâ€™t go anywhere until hisÂ ride showed up! One thing that drove him nuts was hypocrites. He said they just drove him crazy. We were standing near the entrance of the arena where like ten metal detector stations were set up. You know, those areas where security makes sure you donâ€™t bring a knife, gun, flamethrower, rocket-propelled grenade launcher, or an unmanned drone into the venue!! So I said, â€œLetâ€™s say you were going into the concert tonight, and one of those security guards gave you a terrible time. Would you let that stop you from enjoying the concert?â€ He said, â€œNo way.â€ I said, â€œIt is the same thing here. Just because you have seen some hypocrites, donâ€™t let that stop you from finding out who God is and what happens when you die.â€ He liked that response. Then I said, â€œDo you believe there is a God?â€ He didnâ€™t even hesitate. He said, â€œYes!â€ I actually wasnâ€™t expecting that answer, but sometimes, you never know what people are going to say. At the end, he let it slip that his mother is a very strong believer. Loves the Lord. So you know what this coincidence was: Momma was praying for her son and God opened up a door for me to chat with him! Thanks, Mommas, for all of your prayers out there. God is listening! This man ended up taking aÂ One Second After Youâ€¦Â booklet. Please say a prayer for him.

Â Â Â Â  When people walking in told me they were born again or saved, I would say, â€œWhat inside of there is going to glorify the Lord tonight?â€ Well, that prompted a few nice reactions from people! Many just walked away, essentially saying,Â â€œWould you please let me sin in peace tonight.â€Â One young man, toward the end, told me nothing was going to glorify the Lord in that place. He came up to me later and said he didnâ€™t buy a ticket and was not going in. He made the right decision.

Â Â Â Â  One of the saddest moments was when another man, who said he was saved, wanted to debate me. I asked him, â€œWhat in there is going to glorify the Lord?â€ He wouldnâ€™t give me an answer. I said, â€œLook around at all of these lost people. Are you going to do anything to impact any of these peopleâ€™s lives?â€ He said, â€œYes, I am! My wife and I brought a lost person with us!â€ My jaw about hit the concrete. I looked over, and there they were. So instead of taking a lost person out to dinner and discussing eternal matters, now we take them to â€œSinfestsâ€ to feed their flesh, and ours as well. I guess that is the new take on friendship evangelism! The visible church seems to have hit a new low. I told him and others that Elton John will not help anyone get closer to the Lord.

Â Â Â Â  When people told me they were Christians, I told them to pay close attention to the lyrics ofÂ Tiny Dancer,Â which was on Eltonâ€™s set list. Check out a few of the songâ€™s lyrics:

Jesus freaks out on the street

Handing tickets out for God

Turning back she just laughs

Â Â Â Â Â  Yes, Elton John is, and always has, mocked those of us who hand out tracts and try to reach the lost. That is just his style.

Â Â Â Â  Elton has also done more to promote homosexuality in our world today than almost anybody else.

Â Â Â Â Â Hereâ€™s a statement he once made about Jesus Christ during an interview:

â€œI think Jesus was a compassionate, super-intelligent gay man who understood human problems. On the cross, he forgave the people who crucified him. Jesus wanted us to be loving and forgiving. I donâ€™t know what makes people so cruel. Try being a gay woman in the Middle East â€” youâ€™re as good as dead.â€

Â Â Â Â  Elton is in for a world of eternal hurt unless he repents and believes upon the Lord Jesus Christ for the forgiveness of his sins. Please pray for his soul.

Â Â Â Â  Another neat thing that happened was someone took this picture of me talking to one of the police officers there. Heâ€™s under the street light. 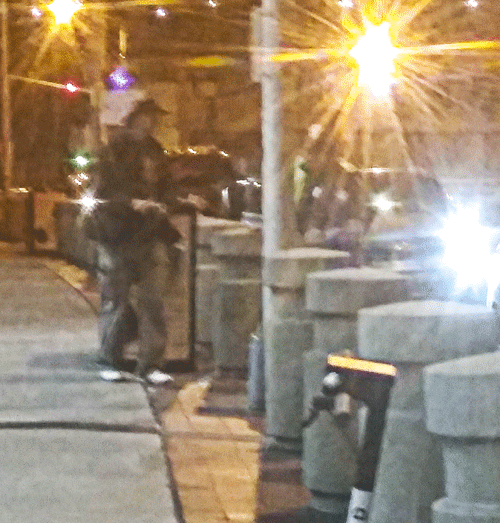 Â Â Â Â Â Micah, the officer I am talking to in the photo, pulled out his phone to show me a picture of his 5 Â½ year-old daughter. I told him, â€œI knew you when you didnâ€™t even have children!â€ I guess I have been out on those streets a long time. Please pray for Micahâ€™s soul as well.

Â Â Â Â  One guy came up to me and said, â€œI met you 17 years ago at the Kensington Marta Train Station!â€ I replied, â€œHow in the world can you remember a stranger from that long ago!?â€ God is good.

Â Â Â Â  I just want to encourage all of you â€œJesus Freaksâ€ out there to keep handing out â€œtickets for God,â€ no matter if the worldÂ laughs and mocks you, or not! Stay bold for the King!!

P.S.Â Our second sale of December will be theÂ 5-Pack Tract bundle.Â Buy 4 packs and get the 5thÂ pack free! 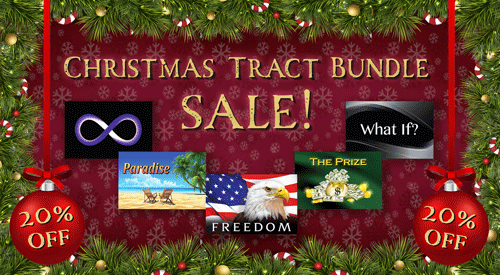