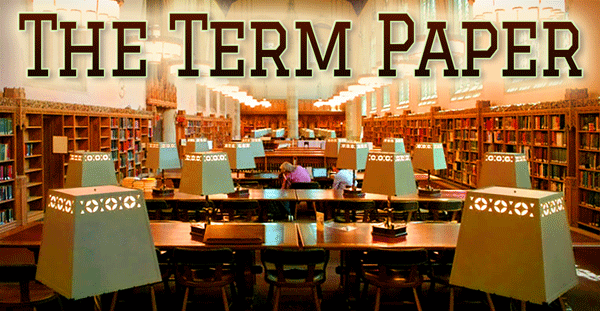 When you make yourself available to help others, you literally have no idea how that situation will turn out. You have no clue what kinds of thoughts are going on in the other person’s mind. You might actually be helping them in a way that is beyond your wildest dreams. And when you might be tempted to think it’s all a waste of time, that may not be the case at all, as Kathy found out. Her story is well worth the read. God was using her to help Melissa the whole time.

Twenty five years ago, in the late ‘90s, I attended a Bible college in the Northwest. In order to pay for my tuition, I worked as a Resident Assistant at a secular college a few blocks away from home. However, this was way more than a job to me; it was ministry. My heart was burdened for the girls in my dorm who did not know Jesus as their Savior.

I’ll never forget a girl named Melissa who lived on my floor. Every afternoon around 3:00 p.m., I would hear the familiar pitter-patter of her slippers as she sauntered down the hallway and into my room. For the next hour, Melissa would spill her guts to me. As much as I would attempt to offer her biblical advice, it seemed to go in one ear and out the other. Some days I wondered, “Okay, why do I bother, Lord?”

I remember one day when she came in and asked me if I would help her with a term paper. I said, “Sure, what’s it on?” “Abortion,” she replied. “I need to discuss the pro’s and con’s.” “There are no pro’s, only con’s!” I insisted.

I pulled out my Bible and showed her all the verses about abortion, such as God knowing us while we were in our mother’s womb, etc. Then I explained to her what actually goes on during an abortion procedure, including the ripping apart of the baby’s body or burning it with saline. I also described the Silent Scream documentary I once watched, which showed, through a video-taped ultrasound, the baby mouthing a scream and desperately pulling away while being sucked up through a vacuum.

I told her again that I wasn’t going to give her a “pro-abortion” viewpoint because there is no valid argument for it, and she was on her own for that.

She thanked me for the help I gave her, and I told her to let me know her grade once she got her paper back. Weeks passed, and I eventually forgot about the paper because the semester drew to a close. I flew to the Midwest and was married at the end of the summer.

A few months later, I received a letter in the mail that had been forwarded from my last address with my maiden name on it. To my surprise, the letter was from Melissa.

In a nutshell, the letter said, 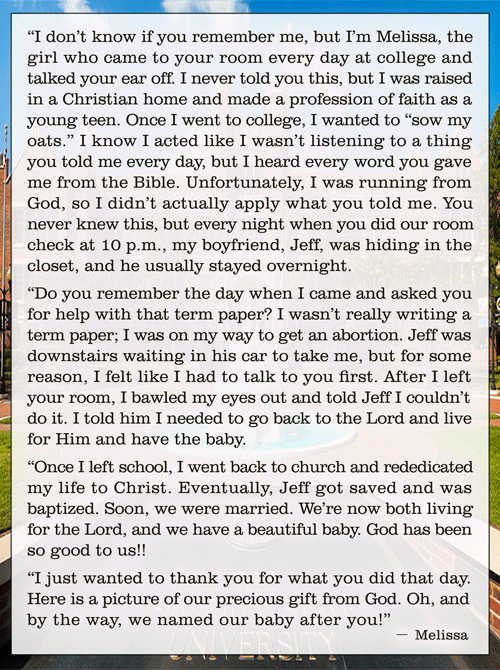 When I received this news from Melissa, I bawled. Never in a million years did I even slightly suspect that she was doing anything other than asking about a term paper!!! Wow, was I wrong, but in a good way!!

Like I said, that was 25 years ago. But a few days ago, I was talking to a friend who is currently a “dorm mom.” We were trading stories of crazy episodes with our girls. The story about Melissa came to mind, and I relayed to my friend the amazing thing God did through that situation. I also mentioned that I wished the Internet and cell phones were a thing back then because Melissa and I had lost touch after moving several times and having so many different mailing addresses. But, then again, social media might not have actually been useful anyway because I didn’t even remember what her last name was to find her on the Internet or on Facebook. I was dying to see what “baby Kathy” looked like 25 years later.

My friend was determined to help me do some detective work to find this baby, so we racked our brains thinking of ideas. As a stab in the dark, I googled the 1997 yearbook for the college, and the entire yearbook was online!! I was able to find both Melissa and Jeff’s last names, and I eventually found them on Facebook.

The only strange thing was I didn’t see a 25-year-old daughter named “Kathy” anywhere!!!

My friend and I kept searching and searching through their pictures, but to no avail. Finally, my friend said, “Hey, Kath, this might sound really strange, but I keep seeing what looks like a 25-ish-year-old guy in these family pictures.” “No,” I sighed. It can’t be him! She said she named the baby after me, and that would be Kathy!! I’m sure the guy’s name isn’t Kathy!!!”

All these years, I pictured a little girl growing up, and all along, it was a boy!!!

I messaged Melissa and reminded her who I was and that I was dying to see the baby grown up. She was so thrilled to be reconnected!!! She said,

Set your affection on things above, not on things on the earth.

Think about the surprises that await us in Heaven. We will have an eternity to spend with the Lord and an eternity to see what He was doing with our lives. We just need to remain faithful and keep investing our time, talents, and treasures in the things that will matter for eternity. Likely, we will have waves of surprises that will be off the charts. Stay focused on the Lord and the precious work He’s given us to do during our short time on earth.

P.S.  Think words are neutral? Listen to this exchange from the Dr. Phil show and see how loaded they can be. Then think about the outcome of discussions that are complete nonsense because the definitions of words mean nothing. We need to keep thinking logically and putting that logic on the table whenever we talk with folks. They may not believe truth now, but they will believe it one day. 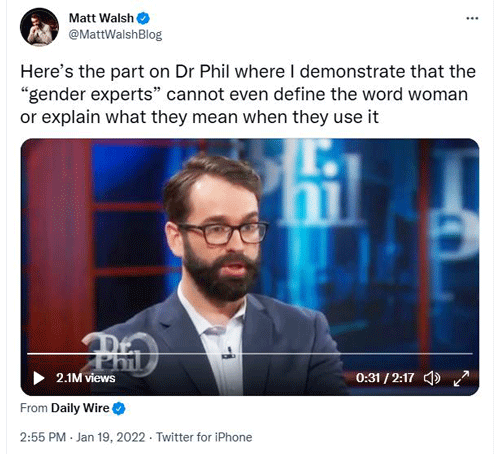 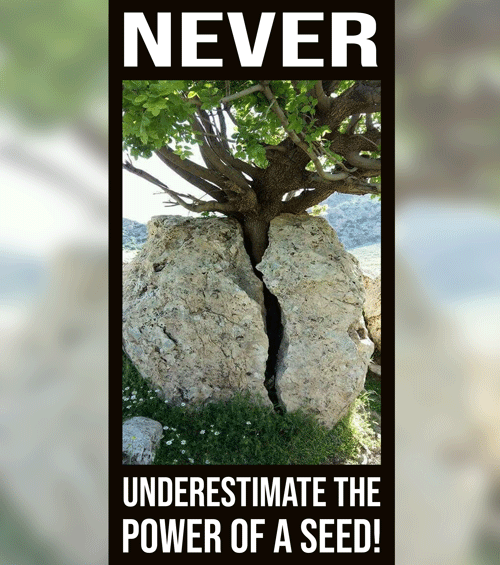