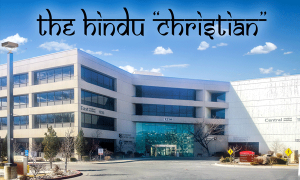 A friend of the ministry sent in this witnessing story. It is really going to make you think!

I handed Dot a tract at the hospital, and she said, “Thank you, what’s this?”

“It’s a tract. I’m a Christian, and I give out these cards so people don’t go where they don’t want to go.”

“Really?! I’m a born-again Christian. How about you?”

“You’re Hindu?!  How can someone be Hindu and a Christian at the same time?”

“I know God exists because I’ve had some spiritual experiences that I can’t deny.”

“Well, it’s important to know you have an enemy of your soul who would love to give you some very real experiences to steer you away from the truth about salvation. The most important question of your existence is where you’re going when you die.”

“I believe that when I die, I’m coming back to this earth.”

“So you must believe in reincarnation, but think about how the force of the universe or the so-called ‘collective Christ consciousness’ doesn’t even tell you how to come back as a human. How can you be sure you’re coming back to earth at all? The God of the Bible tells you exactly what happens when you die.” Then I explained the gospel to her.

Dot then said she had been reading the Koran and thought it sounded just like the Bible. I asked her why she would be reading the Koran if she was sure Hinduism is correct? Then I explained how Islam says, “There is no god but Allah, and Allah has no son,” but in Christianity, it’s all about the Son. I said, “The ‘Jesus’ of Islam, that’s supposedly coming back with the Mahdi, is not the Jesus of the Bible.”

Dot continued, “But don’t you think all religions worship the same god and that we just come to him in different ways? At the Spiritual Awareness Center I attend, we learn about ‘god’ and the principles of science.”

I said, “You want to be very careful about the philosophies of men that are falsely called ‘science.’ You want to know for sure that what you’re staking your eternal life on is real.” Then I explained how the Bible can be proven true through fulfilled prophecies and other evidences.

I said, “Dot, it doesn’t matter how sincerely you believe these things or how sincere the people are who teach them. If what they teach can’t be proven true, then it’s false. Only the Bible can be validated historically, scientifically, and archaeologically. And only the real Jesus can remove your sins.”

Kind of puzzled, I asked, “Why is that?”

“Because just a few weeks ago, I ran into a couple who do the same thing you’re doing. They talk about the same things. They said they are living for nothing other than talking to people about Jesus and the Bible.”

I was floored and said, “That’s amazing, Dot. I think the real God had me cross paths with you today because He wants to get your attention before it’s too late.”

She asked for my email address and phone number, and I wrote them in the materials I had given her. I said I would pray for her. Then we parted ways.

“Study to shew thyself approved unto God, a workman that needeth not to be ashamed, rightly dividing the word of truth.”

False teachings are swirling all around us. How are you going to discern the true from the false? You must study the Bible so you can spot doctrinal error quickly and easily. You never know if God has a “Dot” out there waiting to hear truth!

P.S. Remember to have tracts in your hands, pockets, or pocketbook. God uses them all the time, and He will keep using them until He returns.