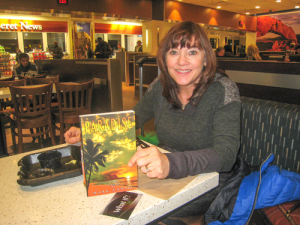 We got this witnessing testimony at the ministry the other day, and I really thought you would be encouraged by it:

I wanted to share this witnessing encounter I had in the Salt Lake City airport last week. Kathleen was having a meal between flights when I handed her a tract. When she realized it was a Christian tract, she was all excited and said, “I’m a Christian, too!”

Kathleen answered, “It’s about walking closely with Jesus and listening to His voice.”

I decided to press the issue and asked, â€œOh, so are you saying that youâ€™re hearing voices?â€

And she answered, “Yes, all the time!â€

â€œWhat are those voices telling you?â€

â€œThey are giving me teachings that I’m writing down in my book.”

Thatâ€™s when things got a little more serious.Â  I said, â€œKathleen, do you read the Bible?â€

â€œSo you’re telling me that you are studying the Bible daily and getting teachings from another source. Is that right?â€

“Well, not exactly. I don’t study the Bible daily. I mostly read my writings daily.”

â€œKathleen, are you aware of the warnings in Scripture about taking instruction from any other source besides the Bible? They’re pretty stiff. They explain that in the Old Testament, channeling information from other spirits was worthy of the death penalty. You might want to look in Deuteronomy 18 and check that out. You donâ€™t want to be taking instruction from spirits or taking their words as being truth. What church did you say you fellowship in?â€

I said, â€œOh, okay, so youâ€™re a Catholic. Has anyone ever explained the differences between Catholicism and biblical Christianity to you?â€

She said she knew the differences, but I explained them to her anyway.Â  I wanted to be sure that she really had heard them and really understood the differences between Catholicism and biblical Christianity. I said, “You see, most religions are going to teach you to be good. And theyâ€™re all going to teach you to be moral. But the real difference between all of them is how they say sins are removed. That’s the real issue because being good can’t take anyone to Heaven. However, our sins can take us to Hell if they havenâ€™t been washed away by perfect blood sacrifice of Jesus. Doesn’t matter if 2 billion people believe that rituals can remove sin if God says those rituals are false. Do you understand what Iâ€™m saying?â€

Kathleen said, “Oh, I believe in Jesus and the cross.”

â€œBut how can you be trusting in the cross when you’re attending a church that trusts in rituals?â€

“Well, I think Catholicism is okay.”

After having explained the gospel and the differences, I gave her your book,Paradise and bookmarked the pages where she needed to start reading with her tract. I told her it addresses the differences between biblical Christianity and Catholicism by comparing Godâ€™s Word against the catechism and that she would be surprised by some of the things the catechism actually teaches.Â  I also told her she needed to know the truth so she didnâ€™t end up where she didnâ€™t want to be for eternity.Â  We parted ways on a positive note and she said she would read your book. Praying she sees the differences and rejects the voices sheâ€™s hearing.

What has happened to Kathleen is no different than what happened to Sarah Young, the author of Jesus Calling and other authors who think they are hearing voices from God. You can see here the importance of a good, solid biblical conversation. You can let what they say open up a door for you, and you just walk through that door with truth. Simple and enlightening for the person who doesnâ€™t have the complete truth yet.

Remember, tracts are very important to be handing out this summer. They might get you into a great conversation with the “Kathleens” of the world! You can click here to pick some up: https://markcahill.org/product-category/tracts/