What If? Tract Sale 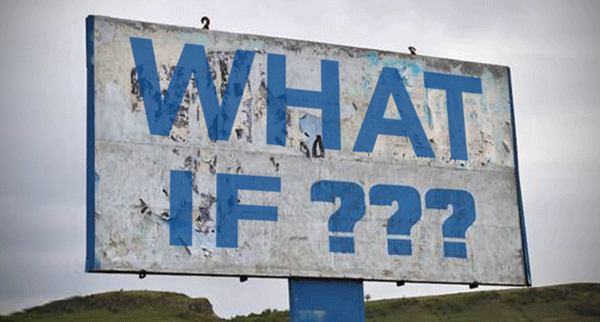 What if you were traveling down the road of life with no idea you had the wrong answer for eternity? What if you had never heard the right answer for salvation? Wouldn’t you want to know? The intersections on the highway of life are our opportunities to give the gospel to those who haven’t heard it or who need to be convinced of the truth.

One police officer had a unique idea for reaching those he takes into custody. He’s making the most of his opportunities. 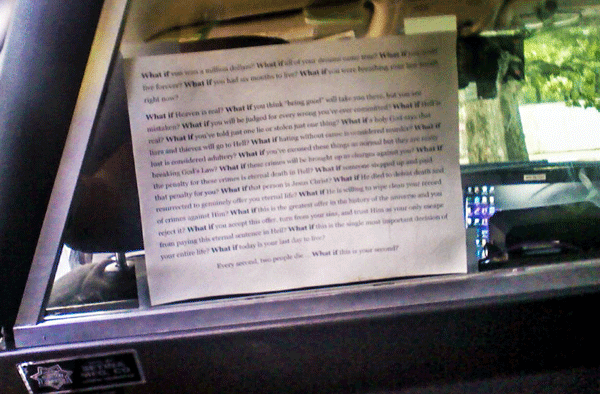 I have an interesting story that I wanted to share with you. The other night, I arrested a guy on some outstanding warrants, after he lied to me about his name. During my investigation, I learned that the driver of the car was his brother and that their dad recently died due to a heart condition. You know that I like to witness to people on the way to jail, but this guy was in a real bad mood. I tried to break the ice by asking him if he and the driver were brothers or cousins. He wanted to “plead the fifth.” He probably thought I was trying to get him to incriminate himself. I decided to soften him up a little bit by telling him that the driver told me that his dad recently died and that I was sorry to hear about it. After a few seconds, he said, “Yeah, my father just died.” I asked him if his dad was a good person, and he said that he was; he drank, but he was a good person. I didn’t think the “Good Person” approach to witnessing would work on this guy. I figured it would turn him off. I was racking my brain trying to figure out how to reach out to him.

I had taken one of the “What If” tracts and enlarged it to a full sheet of paper and taped it to the clear partition that separates me and the prisoner. I figured that if there was someone back there who didn’t want to talk, they might be willing to read it on their ride to jail.

So as we were nearing the jail, the guy I had arrested asked me who wrote the stuff on the paper. I told him that a friend of mine wrote it. He started weeping and said it was very touching. He began to tell me that he knew he had not been living a life that would be pleasing to God. I told him the great part about God and Jesus is that they are waiting for him to come back. They are waiting with open arms, ready to receive him. He said that he had been baptized as a child, but as he got older, he began going in the other direction.

When we got to the jail, I told him that I gave his brother and the other people in the car a booklet that further explained what was written on the paper. I told him that I had one booklet left, and he could have it if he wanted it. He told me that he would really like to read it. So, what started out as him wanting to “plead the fifth” ended with him wanting and taking a booklet.

I am constantly trying to figure out ways to reach people with the gospel, and taping an enlarged version of your “What If?” tract on my partition window was my latest idea. I thought you might like this story.

Blessings to your ministry!

How about you? Are you bold enough to post the wording of a gospel tract in a visible place so others in your home or workplace can read them?

We might also find ourselves talking with someone whose time is much shorter than either you or they realize. You just never know how much time they have left:

As you know, I sell vehicles for a living. I always keep one of your tracts on my desk for people to read.

About a month ago, a husband and wife were in my office purchasing a car. As we were wrapping up the deal, they noticed the “What If?” tract on my desk. They thought it was the coolest thing and asked me if I had any extras they could take with them to pass out. I gave them some, and they were on their way.

I didn’t think anything else about it until three days later when I saw on Facebook that she had a brain aneurism. She died a few days later.

The good news is she was a Christian, and I know she’s in glory now, but the reality is we don’t know “What If” this is our last car we will ever buy or breath we will ever take. Her “What If” came just days afterward.

I’m reminded of James 4:14: Whereas ye know not what shall be on the morrow. For what is your life? It is even a vapour, that appeareth for a little time, and then vanisheth away.

Stay bold and stay true. You never know if your “What If” is today.

Fall is a great time to witness and a great time to hand out tracts! We can look for opportunities on college campuses, at games, or with tailgaters. How about when people are in line to buy hot chocolate or coffee to warm up? Or when trick or treaters knock at your door on Halloween? You can give the kids a tract and an extra booklet and tract as a gift to their parents. These are the people on the highways and byways of life who need the gospel.

To help you prepare to reach them, we are offering our What If? tracts at a discount. These tracts ask the tough questions that can get people thinking about what will really happen to them when they pass to the other side. 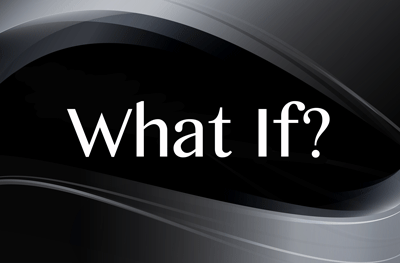 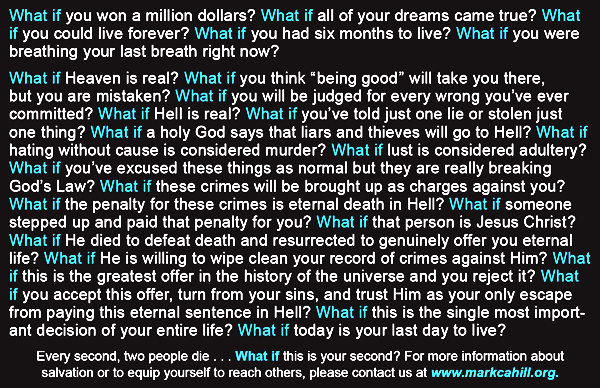 Have a great time making the most of every opportunity the Lord gives you this Fall! 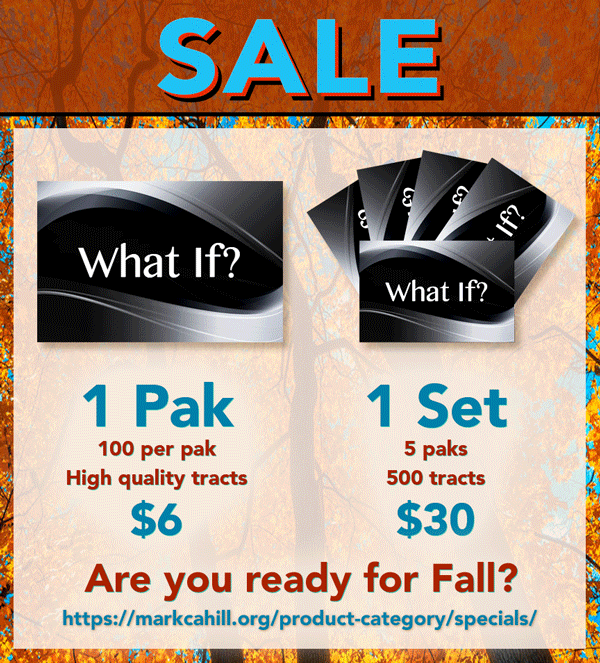 P.S. Apparently, Brandt Jean wasn’t the only one extending forgiveness and the love of God to Amber Guyger after she was sentenced for the murder of his brother, Botham. Judge Kemp took his example another step further. Are you following the example of Christ by showing mercy and forgiveness toward the lost and hurting? 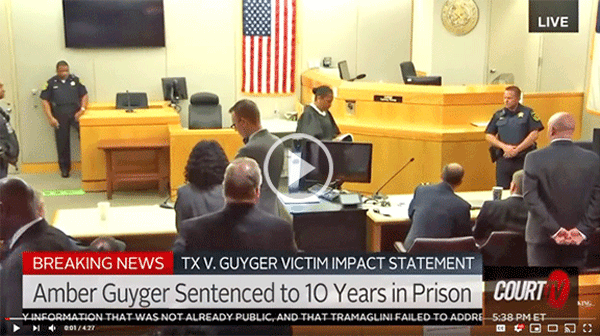