Two Centuries of US Immigration 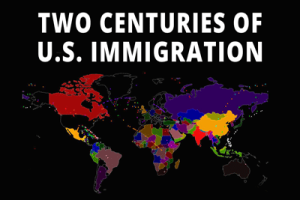 I saw this very short and very interesting video the other day, and it got me thinking:

â€œAnd he said unto them, Go ye into all the world, and preach the gospel to every creature.â€

Â Sometimes, it is hard to figure out what is going on in this world, but at other times it is really simple. Many times you donâ€™t even need to get on a plane to go reach every creature because, sometimes, you just need to open up our front door.

You will be standing in front of the King soon. Make sure you have told people who look like you and who donâ€™t look like you what the cross of Jesus Christ is all about. They are here in America for various reasons, but God has them here to get saved. What are you going to do about it?

P.S. Â Hereâ€™s a story from a friend in Utah who is stepping out of her comfort zone to reach internationals in her community:

This friend wanted to treat her son to take out, and they decided on curry. The curry restaurant they had in mind was a Pakistani place. When they called the order in, the man who answered was very curt and gruff. So her son said, “Mom, whatever you do, don’t witness there!” They were known in town for being Muslim.

It was right before closing and late at night when she walked in, and sure enough, he appeared to be all business. He and his wife and kids were getting ready to close. Then all of a sudden, he came to the register and his whole demeanor changed. He was all smiles.

So she said, “Hi, nice place you have here. How long have you been in business?” He talked about all the changes he had seen in his area over the 32 years he had been in business. Since his business is in Utah, she asked, “What brought you to town? You’re not LDS are you?” He chuckled and said, “No, we’re Muslim. And we wanted a peaceful place to live.”

She said, “Interesting, interesting. You’re Muslim, and I’m a born-again Christian!” He said, “It’s all the same God, we just worship him as Allah.” She said, “How can they be the same when Allah has no son and Christianity worships the Son?” Then he said, “Well, it’s all a matter of just being good.” Perfect opening.

She said, “Well, let me explain. What’s your name?” He said, “Rana.” So she said, “Rana, let’s say you broke the law in Utah and you were brought before the judge. Can you say, ‘Hey judge, I know I broke the law, but I’m a pretty good person.’ Is he going to let you off?” Rana smiled.

Then she said, “And let’s say you and I are both standing together before the judgment seat of God. And let’s say I’m going where I don’t want to go, but I think you’re a good person, so I propose, ‘Lord, Rana here is a really good person. Let me take his sin and let him go free.’ Rana, God would say, ‘Oh, no. Rana has his sin and you have yours. The only way Rana goes free is if someone without sin loves him enough to stand in and taken his penalty.’ So Rana, where are we going to find a man without sin who loves us enough to take the penalty for our sin?” Rana was listening. I think he liked being in the story.

Then she said, “See, there is no one sinless but God. The miracle of God’s love is that He became a man to be your sin sacrifice. He died so you wouldn’t have to. He took on flesh to die in your place.” Rana was thinking.

She said, “Do you like to read?” He said, “Yes.” So she gave him a One Heartbeat Away book and his family Second Greatest Lie booklets. And then she said, “So am I going to like your curry?” He smiled and said, “Oh, yes.” She said, “Good, then I’ll be back!” He continued to beam ear to ear….and to think that she had been afraid to even talk to him in the first place! She was thanking God all the way home for the favor that opened his heart to listen and for the curry in a hurry!