This Shack is Burning 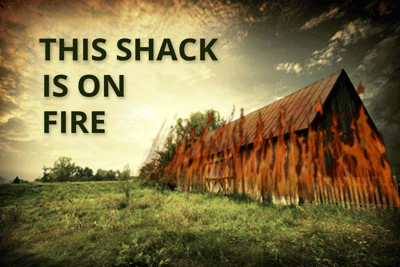 AÂ very controversial movie based on the book The Shack is coming out on March 3rd. This is a very easy statement for me to make: Do not waste your money to go see this movie, do not buy a ticket for a lost person to go with you to see this movie, and do not purchase this book or give this book away to anyone. Yes, I know those are strong words. Hereâ€™s another statement that is even stronger: This book is easily one of the worst books written in the history of Christianity. Yes, I wrote that, and I meant that.

There has been so much written about the false teachings found in this book that researching its errors is pretty easy to do. David Cloud of Way of Life Literature (www.wayoflife.org) has written the article, â€œThe Shack’s Cool God,â€ which is a comparison and contrast between the god of The Shack and the God of The Bible. The following quotes are excerpted from his article:

The god of The Shack: â€œI donâ€™t need to punish people for sin. Sin is its own punishment, devouring you from the inside. Itâ€™s not my purpose to punish it…â€ (p. 120).

The God of the Bible: â€œAnd I will punish the world for their evil, and the wicked for their iniquity; and I will cause the arrogancy of the proud to cease, and will lay low the haughtiness of the terribleâ€ (Isaiah 13:11).

The god of The Shack: â€œThere are lots of people who think it [Eden] was only a myth. Well, their mistake isnâ€™t fatal. Rumors of glory are often hidden inside of what many consider myths and talesâ€ (p. 134).

The God of the Bible: â€œFor we have not followed cunningly devised fables, when we made known unto you the power and coming of our Lord Jesus Christ, but were eyewitnesses of his majestyâ€ (2 Peter 1:16).

The god of The Shack: â€œ[Your heart] is wild and beautiful and perfectly in processâ€ (p. 138).

The God of the Bible: â€œFor from within, out of the heart of men, proceed evil thoughts, adulteries, fornications, murders, Thefts, covetousness, wickedness, deceit, lasciviousness, an evil eye, blasphemy, pride, foolishness: All these evil things come from within, and defile the manâ€ (Mark 7:21-23).

The God of the Bible: â€œFor whom the Lord loveth he chasteneth, and scourgeth every son whom he receivethâ€ (Hebrews 12:6). â€œRepent; or else I will come unto thee quickly, and will fight against them with the sword of my mouthâ€ (Revelation 2:16).

The god of The Shack: â€œOur final destiny is not the picture of Heaven that you have stuck in your head–you know, the image of pearly gates and streets of goldâ€ (p. 177).

The God of the Bible: â€œAnd the twelve gates were twelve pearls; every several gate was of one pearl: and the street of the city was pure gold, as it were transparent glassâ€ (Revelation 21:21).

Regarding the Christian church:

The God of the Bible: â€œAnd I say also unto thee, That thou art Peter, and upon this rock I will build my church; and the gates of hell shall not prevail against itâ€ (Matthew 16:18).

Regarding the exclusivity of Christianity:

The god of The Shack: â€œThose who love me come from every system that exists. They were Buddhists or Mormons, Baptists or Muslims, Democrats, Republicans and many who donâ€™t vote or are not part of any Sunday morning or religious institutions. … I have no desire to make them Christianâ€ (p. 182).

The God of the Bible: â€œNeither is there salvation in any other: for there is none other name under heaven given among men, whereby we must be savedâ€ (Acts 4:12). â€œThen Agrippa said unto Paul, Almost thou persuadest me to be a Christian. And Paul said, I would to God, that not only thou, but also all that hear me this day, were both almost, and altogether such as I am, except these bondsâ€ (Acts 26:28-29).

The god of The Shack: â€œThrough his death and resurrection, I am now fully reconciled to the world … The whole world. … In Jesus, I have forgiven all humans for their sins against me … When Jesus forgave those who nailed him to the cross they were no longer in his debt, nor mineâ€ (pp. 192, 225).

The God of the Bible: â€œHe that believeth on the Son hath everlasting life: and he that believeth not the Son shall not see life; but the wrath of God abideth on himâ€ (John 3:36). â€œAnd the times of this ignorance God winked at; but now commandeth all men every where to repent: Because he hath appointed a day, in the which he will judge the world in righteousness by that man whom he hath ordained; whereof he hath given assurance unto all men, in that he hath raised him from the deadâ€ (Acts 17:30-31). â€œHe that hath the Son hath life; and he that hath not the Son of God hath not lifeâ€ (1 John 5:12). â€œAnd whosoever was not found written in the book of life was cast into the lake of fireâ€ (Revelation 20:15).

Regarding the Christian walk:

The god of The Shack: â€œThe Bible doesnâ€™t teach you to follow rules. … Enforcing rules, especially in its more subtle expressions like responsibility and expectation, is a vain attempt to create certainty out of uncertainty. … That is why you wonâ€™t find the word responsibility in the Scriptures. … because I have no expectations, you never disappoint meâ€ (pp. 197, 203, 206).

The God of the Bible: â€œFurthermore then we beseech you, brethren, and exhort you by the Lord Jesus, that as ye have received of us how ye ought to walk and to please God, so ye would abound more and more. For ye know what commandments we gave you by the Lord Jesusâ€ (1 Thessalonians 4:1-2).

â€œIn Ephesians 4-6 alone there are more than 80 specific rules and obligations that believers are exhorted to keep.â€

The God of the Bible: â€œAnd this is the condemnation, that light is come into the world, and men loved darkness rather than light, because their deeds were evilâ€ (John 3:19). â€œNow we know that what things soever the law saith, it saith to them who are under the law: that every mouth may be stopped, and all the world may become guilty before Godâ€ (Romans 3:19). â€œWherefore whosoever shall eat this bread, and drink this cup of the Lord, unworthily, shall be guilty of the body and blood of the Lordâ€ (1 Corinthians 11:27). â€œMy brethren, be not many masters, knowing that we shall receive the greater condemnationâ€ (James 3:1). â€œAnd the nations were angry, and thy wrath is come, and the time of the dead, that they should be judged, and that thou shouldest give reward unto thy servants the prophets, and to the saints, and them that fear thy name, small and great; and shouldest destroy them which destroy the earthâ€ (Revelation 11:18).â€

James De Young, a former colleague of the author of The Shack, wrote an entire book critiquing this book titled Burning Down the Shack. You know you are in trouble when someone can write an entire book about the false teachings in the book you have written! http://www.wnd.com/2010/05/156873/

â€œâ€™Indeed, the need for Christ to die a sacrificial death for people’s sins is dissipated and eventually erased. But the greatest danger is that universal reconciliation redefines who God is by insisting that the attribute of God’s love trumps his other attributes of justice, holiness and righteousness. Love limits his other attributes. In so doing, some attributes are not fully expressed or perfect. In this way God ceases to be God. Instead we have a man-created, man-centered god.â€™â€ http://ppsimmons.blogspot.com/2017/02/latest-christian-film-blasted-as-not-so.html

Universal Reconciliation is the false belief that â€œall souls will one day be reconciled to God.â€ This belief is not biblical and is a heresy that must be opposed in the fiercest way possible.

Years ago, someone sent me a review of The Shack that piqued my curiosity and prompted me to do some more research about it. I found that many people had written critiques because there is so much false teaching in the book. Thatâ€™s why itâ€™s always good to pass a newsletter like this along to others. They might read it and start doing their own research and be equipped to help others.

So there is no need to take two hours of your life or a $10 bill to go and see this movie. Instead, use the time this weekend to go witnessing at the mall and use the $10 to order some tracts away to give away or to bless a homeless person or to send to a missionary.

If someone wants to read a book about the God of the universe, give them a Bible or a good, biblically-solid book that explains Him correctly.