Shy and Passive at Niagara Falls 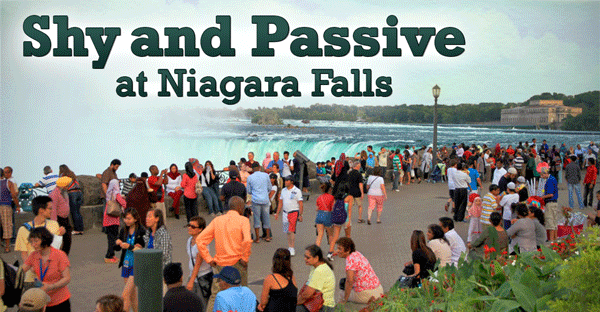 We received a lot of feedback last week about how Linda is investing in the life of a young man at her church named â€œJordan.â€Â We are glad to hear that her story encouraged so many of you. If you want to look over that newsletter, it can be found here:Â https://markcahill.org/investing-in-others/

We also heard back from Linda about Jordanâ€™s progress, and she said the following:

â€œKeepÂ praying for Jordan!Â I saw the youth pastor hand him a pile of church tracts and heard Jordan say, â€œUmm, got anymore? Those will only last me a day or two!â€ So, I am loading him up with your tracts and Chick tracts before I leave for Georgia on Monday.â€

Hmmm. I think we should pray for Jordan. Satan does not like that kind of zeal for the work of the Lord!

Here is one piece of feedback we received from her story about Jordan. Itâ€™s from Bob, a friend of the ministry who lives down in Honduras. Hewrote:

If the Body of Christ did more of what Linda is doing, Mark, more of the lost would be won to Christ. Nothing is better than the â€œPaul to Timothyâ€ lesson.

I was influenced for life, from the age of 15 through 18, by a man of God who came to our area during my teen years to live with his parents. He was in his early 20s. He had returned to the Lord with fervor and boldness to both witness and to stimulate the young people to give greater service to the Lord.

He took me, a very shy and passive kid, to Niagara Falls, along with others, on many Saturday and Sunday afternoons to witness. The others didnâ€™t want to keep going, but God held me firmly, and I continued going there with Vic. It was only 10 miles from our city.

Vic had a â€™58 solid white, convertible Ford. The trunk lid at the rear had a high white portion, so he took a red paintbrush and wrote â€œJesus Savesâ€ on it.

I had never seen anyone so bold â€• ever â€• for the Lord back then and have seen very few since!!

We gave out 8,000 to 10,000 tracts to tourists on several evenings. People there were from everywhere.

He helped to break me of my shyness, and thereafter, I started carrying a few tracts with me.

I just turned 72, and I just signed the backs of about 12 tracts before leaving to get some things. The habit I learned from Vic at 15 has never left me. Iâ€™ve had a lot of failings, but this one habit has never left me after all these years.

Please pass this on to Jordan. Tell him Iâ€™ll pray that he learns to do what I have done and perfects the opening up of good conversations, just as you do, Mark.

CanÂ you picture the impact that Vic had on Bob? If you have ever been to Niagara Falls, then you know it is a great place to witness because you literally meet people from all over the world there. Little did Vic know that Bob would continue to be a bold soldier for the Lord, not only in Canada but also when he moved to Honduras to practice his profession. He has given out many tracts to the folks down there as well!

Should you invest in the stock market? Invest in cryptocurrency? Nah. Invest eternally in the life of another human being. It is well worth your time, and it might just ripple all the way into another country one day and help to fill up the Lambâ€™s Book of Life!!

P.S.Â  As we move into the Christmas season, itâ€™s a great time of year to be out and about, reaching people for Christ. Folks are shopping, hanging out in malls, dining in restaurants, attending events, and even standing and waiting in lines. Each of these situationsÂ are an opportunity to hand them a tract and see where the Lord takes the conversation from there.

So,Â to help you in your holiday witnessing, we have dropped the suggested donation of tracts toÂ $6 per pack, whetherÂ itâ€™s a single pack for $6 or a bundle of 5 packs for $30. Stock up now and kick the season off for the Lord with both feet running to find those lost souls who need the gospel! 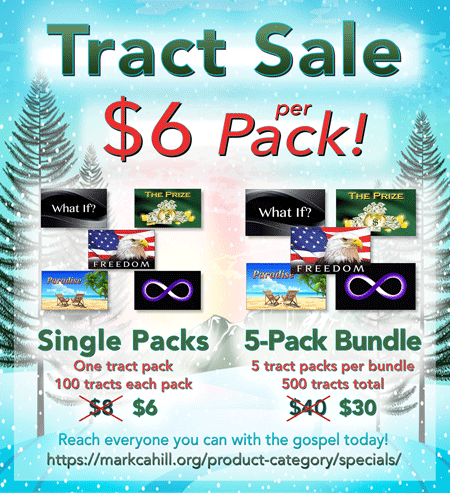 P.P.S. During simple trip to the convenience store can be a divine appointment for someone you meet. Read what happened to Michael one day as he was walking in his neighborhood. Tracts are a great way to get that conversation started! 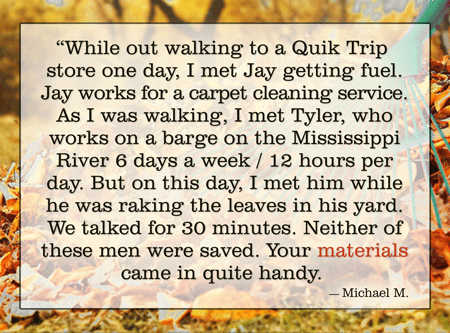 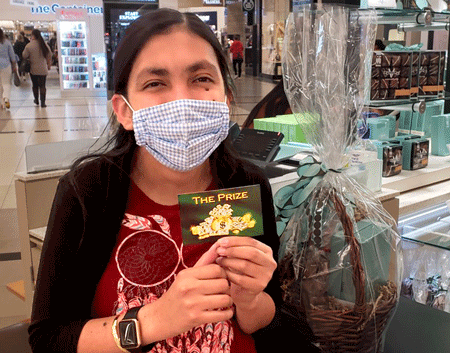