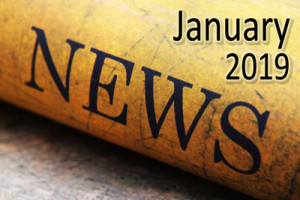 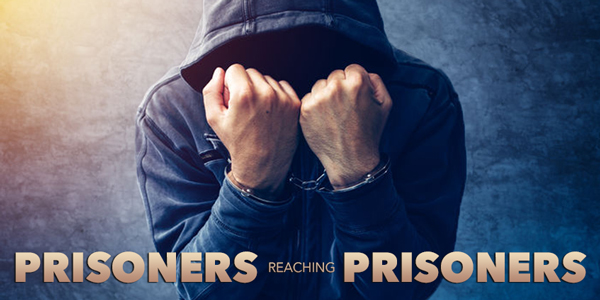 Russell is an inmate who was radically savedÃ‚Â justÃ‚Â before the arrest that led toÃ‚Â his prison term. Even though he is incarcerated, he takes his job of reaching the lost seriously. He intends to serve out the remainder of his sentence as a watchman on the Ã¢â‚¬Å“insideÃ¢â‚¬Â reaching other prisoners on the Ã¢â‚¬Å“insideÃ¢â‚¬Â with the gospel. He sent us this fascinating story:

Ã‚Â Ã‚Â Ã‚Â Ã‚Â I do a lot of ministering here in prison and have done my best to do so for many years (this is my 18th year in prison). But no matter how much ministering I do, thereÃ¢â‚¬â„¢s always a need for more.

Ã‚Â Ã‚Â Ã‚Â Ã‚Â About six weeks ago, I started reading The Watchmen and found it very refreshing and motivating. It refocused my attention on what I do in here: share the gospel with those around me.

Ã‚Â Ã‚Â Ã‚Â Ã‚Â Ã‚Â About halfway through your book, I felt convicted and prayed for the Lord to give me opportunities, which He did. A few days later, someone sat down next to me in the recreation yard. This situation was different because it was a transgender man. I had seen him numerous times on the compound, but I had no idea how to open up a conversation with him. I kept thinking, “HeÃ¢â‚¬â„¢s just going to tell me to buzz off and get out of his face.” I prayed, but I let the opportunity escape. Then he sat next to me a second time, but I waited too long and another transgender sat down, and I missed out again.

Ã‚Â Ã‚Â Ã‚Â Ã‚Â Ã‚Â A few weeks passed, and the Lord provided yet another opportunity. This time, he was watching TV by himself, and I thought I could at least “break the ice.” So I decided to ask him about the news he was watching and then followed up later with questions about any news updates. That opened the door for us to start talking, and I began to tell him what the Lord had been doing in my life during my many years in prison. He was glued to what I was saying. I told him repeatedly that the Lord loves him and has a plan for his life. ThatÃ¢â‚¬â„¢s when he said he had been told God would never accept a person like him. After I shared the truth about GodÃ¢â‚¬â„¢s love and acceptance of him (this is going to sound funny, but it`s what happened), he put his hands on his artificial chest and in all seriousness said, “What about this?” My response was, “God will help you with whatever you need. Think of it this way: you donÃ¢â‚¬â„¢t have to see the whole staircase of faith, only the first step.” He liked that analogy.Ã‚Â Ã‚Â Ã‚Â

Ã‚Â Ã‚Â Ã‚Â Ã‚Â Ã‚Â Continuing the conversation the next day, I asked him if anyone had ever taken the time to share GodÃ¢â‚¬â„¢s plan of salvation with him. It broke my heart to hear him say, “No, most people just shun me.Ã¢â‚¬Â I suggested, “LetÃ¢â‚¬â„¢s meet again tomorrow, and I will explain it and show it to you in the Bible.” He liked that idea, but I forgot how the enemy would do all he could to stop that from happening.

Ã‚Â Ã‚Â Ã‚Â Ã‚Â Ã‚Â Ã‚Â So the next day, I waited in the recreation yard with my Bible, but when he showed up, there was all this craziness going on around him. People were pulling his attention in all different directions. He was in a spin. The same thing happened the next day and the next. So finally, I said, “Coco, why donÃ¢â‚¬â„¢t I just write it all out and give it to you tomorrow?”Ã‚Â  He thought that was a great idea, and so I went back to my unit and spent hours writing and then typing out “The Roman Road” and explaining what each of its Scriptures meant. The next day, I handed him the papers in an envelope.Ã‚Â

Ã‚Â Ã‚Â Ã‚Â Ã‚Â Ã‚Â A few days passed, and when I was jogging at the track, I happened to come up on him. He said to me, “That information was great! When can we talk some more?” So we made plans to meet again, but then we encountered yet another obstacle, heavy rains that closed the Rec for what seemed like weeks.

Ã‚Â Ã‚Â Ã‚Â Ã‚Â Ã‚Â When we finally did meet again, he asked a few more questions. We had only been talking about fifteen minutes when he asked, “What do I need to do to accept Jesus?” So we held hands and prayed, right then and there. It was awesome. When we finished talking, we hugged. I stood up to leave, only to see a sight that you would have to be Ã¢â‚¬Å“in hereÃ¢â‚¬Â to fully appreciate. Probably sixty or more men were staring at me, many of them with scowls on their faces, assuming that I was somehow “involved” with Coco (who told me I could now call him by his real name, Charmon). It was priceless to see, and all I could do was laugh.

Ã‚Â Ã‚Â Ã‚Â Ã‚Â Ã‚Â Later that same day, I gave my new brother a study Bible. He was so grateful. Christians on the outside had been praying for him and sending so many encouraging emails that he said he had never experienced that much love in his life. It was truly a humbling thing to hear. It put in perspective how others in his same circumstance need to be touched by the love of God through the gospel, too.

Ã‚Â Ã‚Â Ã‚Â Ã‚Â Ã‚Â Within days, men from the gay community raised a ruckus over his conversion, but Charmon says there is Ã¢â‚¬Å“no turning back.Ã¢â‚¬Â He says heÃ¢â‚¬â„¢s going to have to learn how to live the right way and is very serious about his new-found faith.

Ã‚Â Ã‚Â Ã‚Â Ã‚Â Ã‚Â Please pray for this dear brother. We are not ignorant of the enemyÃ¢â‚¬â„¢s devices, and we know that CharmonÃ¢â‚¬â„¢s fight has really just begun. But praise the Lord because our victory has already been won at Calvary.

I thank God for you, 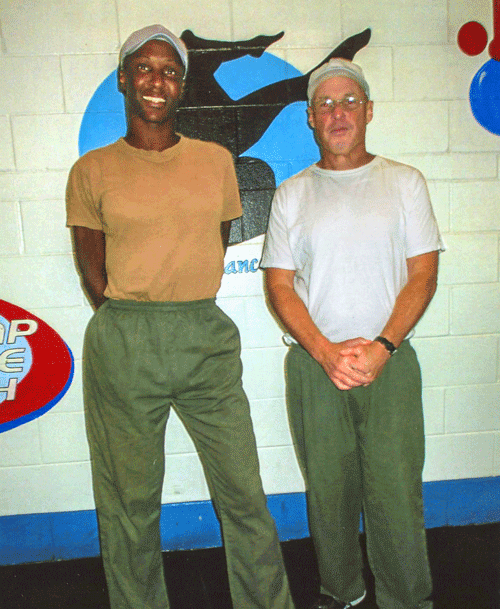 Charmon later explained to Russell how he had sought spiritual counsel before his gender reassignment surgery but had been given bad and misleading advice. Even after his surgery, he tried to find spiritual answers, but was so badly chastised by others that he abandoned his search for truth and continued on his own path to find happiness. He was constantly told how he was an abomination to God. He was willing to listen to Russell because he knew his intentions were not to judge him, but to share the Ã¢â‚¬Å“Good News.Ã¢â‚¬Â

Now that Charmon is free in Christ, he hopes God will use him to reach out to other transgenders and people in his community with the love, hope, and forgiveness in Jesus Christ. He gives the Lord all the praise for being saved!

Ã‚Â Ã‚Â Ã‚Â Ã‚Â  Charmon has a lot to look forward to as he begins the New Year and his new life in Christ.

For God so loved the world, that he gave his only begotten Son, that whosoever believeth in him should not perish, but have everlasting life.

And this is the record, that God hath given to us eternal life, and this life is in his Son.

Ã‚Â Ã‚Â Ã‚Â Ã‚Â  Charmon now has that life and wants to share it with everyone he can. Make sure 2019 is the boldest year yet in planting many seeds with the lost!

P.S. A lot of us were out witnessing on New YearÃ¢â‚¬â„¢s Eve at the Atlanta Peach Drop. It was a good night to hand out tracts andÃ‚Â get into some good conversations! 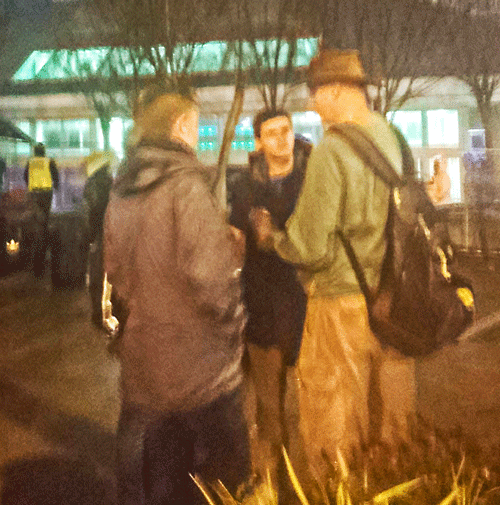 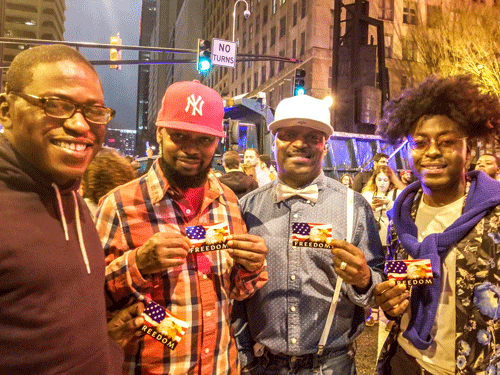 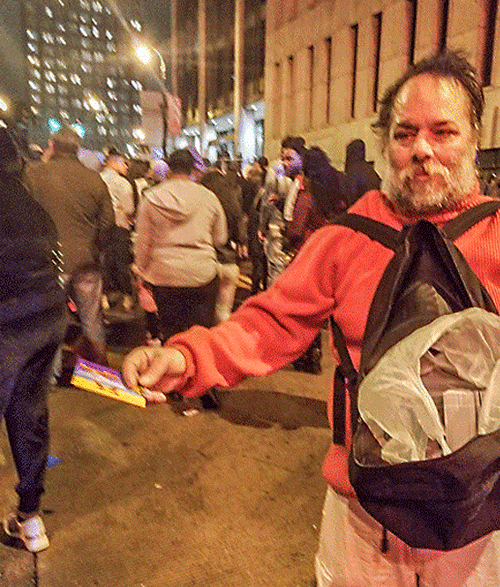 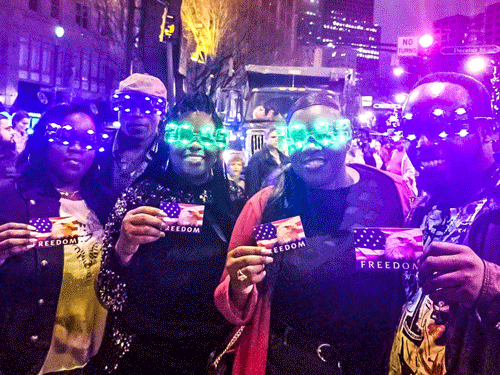 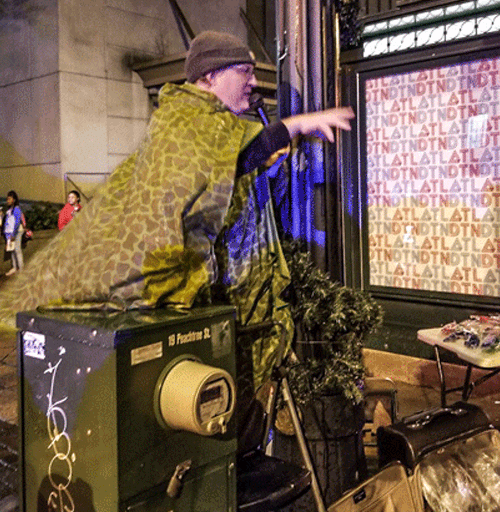 Back to Walking inÃ‚Â Truth