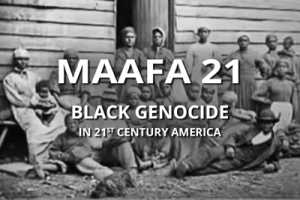 As people gear up for the March for Life 2017, scheduled for January 27th in Washington DC, I am reminded about the great importance of the Pro-Life movement, as well as the devastating consequences of murdering babies.

So every year about this time, I watch the Maafa 21 movie again. It points out that when Charles Darwin set sail to voyage across the ocean on the Beagle, no one could have imagined the genocide of humanity that his â€œSurvival of the Fittestâ€ theory would bring. As Maafa 21illustrates, this theory has been the driving force behind eugenics, population control, sterilization, abortion, and more. God says that human life is precious, and children are a blessing.

â€œSo God created man in his own image, in the image of God created he him; male and female created he them.Â  And God blessed them, and God said unto them, Be fruitful, and multiplyâ€¦â€

Could â€œSurvival of the Fittestâ€ be causing similar trouble for us today?Â  You be the judge. Here are some quotes from the video that should truly make your blood boil:

â€œâ€¦average Negroes possess too little intellect, self-reliance, and self-control, to make it possible for them to sustain the burden of any respectable form of civilization without a large measure of external guidance and support.â€

â€œI consider that the world and almost our civilization for the next twenty-five years, is going to depend upon a simple, cheap, safe contraceptive to be used in poverty stricken slums, jungles, and among the most ignorant people. Even this will not be sufficient, because I believe that now, immediately, there should be a national sterilization for certain dysgenic types of our population who are being encouraged to breed and would die out were the government not feeding them.â€Â

â€œIt is better for all the world, if instead of waiting to execute degenerate offspring for crime, or to let them starve for their imbecility, society can prevent those who are manifestly unfit from continuing their kindâ€¦Â  Three generations of imbeciles are enough.â€Â

â€œThe ministerâ€™s work is also important and also he should be trained, perhaps by the Federation as to our ideals and the goal that we hope to reach. We do not want word to go out that we want to exterminate the Negro population and the minister is the man who can straighten out that idea if it ever occurs to any of their more rebellious members.â€

â€•Margaret Sanger, in a letter to fellow eugenicist Clarence Gamble

To see a list of the Margaret Sanger Award Winners chosen by Planned Parenthood, click on the following link. This is a list you never, ever want to find your name on:

Normally, you might enjoy a documentary as powerful and well-documented as Maafa 21,but you might not enjoy this film at all. It might make you mad. It might make you angry. If so, that is okay. But it is not okay to be angry and do nothing about it. Make sure that you take action after viewing this fascinating documentary, which covers the history brought about by Darwin, eugenicists, Margaret Sanger, Planned Parenthood, the Nazis, Adolph Hitler, and much more.

This film is a strong reminder about how evil people and governments can be. We need to trust the God of the Bible, and no one else.

Always remember that ideas have consequencesâ€•especially bad ideas. And Darwinâ€™s ideas have affected our culture and history in ways we canâ€™t even imagine. The abortion agenda is nothing less than genocide, plain and simple. How much longer are you going to let genocide continue in the community where you live?

â€œLest Satan should get an advantage of us: for we are not ignorant of his devices.â€

Satan convinced people to murder babies during the time of Moses, in the years when Jesus Christ was born, and now, once more, in the final days before our Lord returns. His game plan is always the same.

â€œHe was a murderer from the beginning, and abode not in the truth, because there is no truth in himâ€¦â€

â€œAfter this I beheld, and, lo, a great multitude, which no man could number, of all nations, and kindreds, and people, and tongues, stood before the throne, and before the Lamb, clothed with white robes, and palms in their hands;â€

God has made all people and all colors of people, and they are all going to look great in their white robes before the Throne one day! Iâ€™m so glad we have the Bible in our hands to make this easy to figure out.

And remember, anything is possible if you do not know the Word of God. Read and heed all the days of your life!

Please enjoy this powerful video, Maafa 21, as the March for Life 2017 takes place in just a few days. https://www.youtube.com/watch?v=HshhtiNm2Kc