Failure Is Not Fatal 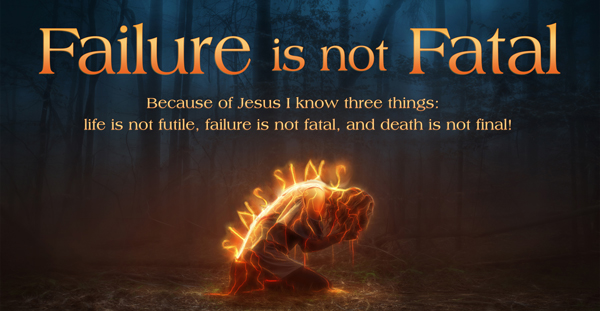 We all mess up in life at one time or another. And most all of us want to be forgiven of those wrongs. Sin injures people, and it injures God. When others offend us, the Lord wants to demonstrate His character of love and charity through us.

After reading about the mercy shown in the Botham Jean trial in Texas, a friend sent in her own account of courtroom mercy and forgiveness that eventually humbled a very hard heart and turned a life around. It shows how the hardest of hearts can be softened by love and truth, giving every man hope for reconciliation with God and others:

What a wonderful testimony of God’s great grace and love! I saw that once in a courtroom in North Carolina where I went with a lady whose husband had abused her terribly. Then he left her and his children.

After the sentence had been pronounced, this lady asked if she could speak. The Judge gave her permission, and she told her ex-husband that she had forgiven him because God had forgiven her of her sins. She said she wanted him to know the same grace and mercy that she had been given and then asked the court if they could show him mercy. The Judge amended the sentence and told the man that he would be watching how he received this great show of grace from the woman he had so abused.

A year after this happened, the man wrote a letter to the Judge and told him how when he left the court, he was laughing inside and thinking, “What fools.” He tried to find another woman to live with, but couldn’t. He said it was like he had a mark on him, and women avoided him. He finally found a job and lo and behold, the employer was a Christian, who let her ex-husband stay with him and his family. Her ex-husband saw how a Christian home operates. After a few months in this environment, he was convicted of his sin and accepted Jesus as the Lord of his life. He contacted his wife and children, they met, and the Christian employer helped them through a reconciliation process. They have been back together now for thirty plus years! In fact, when I visited North Carolina not long ago, I stayed with them!! You could feel the love and respect that filled their lives, and the children are all thriving and living for Jesus!!

I am always amazed at what the world would consider the most horrible situation ever. God can doâ€”and wants to doâ€”what He has done in Texas for EVERYONE WHO will receive Him!!

Jo Anna
Because of Jesus I know three things: life is not futile, failure is not fatal, and death is not final!

My little children, let us not love in word, neither in tongue; but in deed and in truth.

Walking in love and truth is the most powerful combination on earth! Let your love of people be real and let your love of the truth be even more real. Jesus was the embodiment of truth and love as He walked through this world. If thatâ€™s how He lived, then we should go and do likewise.

Return to Walking in Truth