Doing Your Best for Jesus 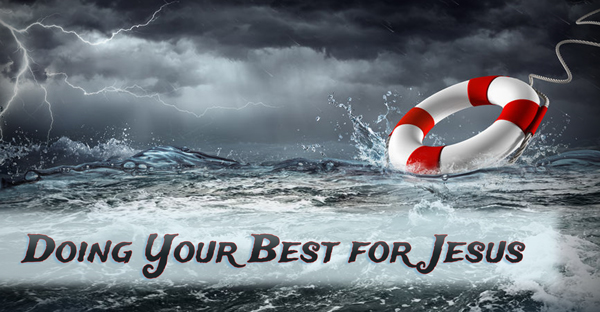 I find it fascinating to learn the history behind some of the great hymns. One of those hymns is Have I Done My Best for Jesus. Recently, David Cloud of Way of Life Literature (https://www.wayoflife.org/) featured the story of Edward Spence whose amazing act of heroism inspired the writing of this timeless hymn.

Edward SpencerÂ was a student at Garrett Biblical Institute in Evanston, Illinois, on Lake Michigan.

On the morning of September 8, 1860, Ed heard the news that theÂ Lady Elgin,Â an overloaded steamship,Â had collided with the lumber-hauling schoonerÂ Augusta, and had sunk. People were drowning, and nothing could be done because of the heavy waves and strong currents.Â

Ed ran to the shores of the lake and saw that the situation was indeed serious. People were floating on pieces of wreckage in the waters, close enough to shore for their cries of help to be heard, but unable to swim to safety.Â

Without hesitation, Ed stripped himself of excess clothing and dove into the rolling waves. He was able to reach the first person, a woman who had clung to a piece of wreckage for hours and was totally exhausted, and bring her to shore. He later said, â€œThen the struggle began, the huge breakers forcing us towards the shore, keeping us buried much of the time, and the strong undertow tending to carry us back out into the lake. It was a struggle indeed, and I was gaining but little when two tall, stout biblical students, to whom I had signaled, came to our reliefâ€ (cited from Josiah Currey,Â Chicago: Its History and Its Builders).

He repeated this heroic act several more times before onlookers and friends began to say, â€œEd, youâ€™ve got to stop. Youâ€™ve done all you can. Youâ€™ll kill yourself if you keep going!â€ Ed did not hesitate. He replied, â€œIâ€™ve got to do my best,â€ and plunged again into the water. On one trip he was hit in the head and injured by a piece of wreckage.Â

Ed Spencer had done his best, but it cost him his health. He lived the rest of his life as a semi-invalid due to injuries sustained during the rescue. It was in Phoenix, Arizona, in a humble cottage, that Ensign Edwin Young found him. Mr. Young, Dean of the School of Music at Hardin-Simmons University, had heard his story and heard that he could be found in Arizona. He found a man no longer a robust athlete, but a shadow of the strong man he once was.

During the course of their visit, Mr. Young commended him for his heroic action and asked how he had been recognized during his life by the people whose lives he had saved that day. With tears streaming down the invalidâ€™s cheeks, he replied,Â â€œNot one ever came back to even say thank you.â€

It was the retelling of this story that led Ensign Edwin Young to write, â€œHave I Done My Best for Jesus?â€

How many of us would risk everything to rescue the perishing from certain death? Jesus Christ did. As the storm clouds of Judgment loom in the distance and the world gets darker by the day, itâ€™s time to sling our life-preserving gospel materials and Bibles over our shoulders and head out into the rough seas of the world looking for those who needÂ to be rescued.