Do You Need a Chiropractor 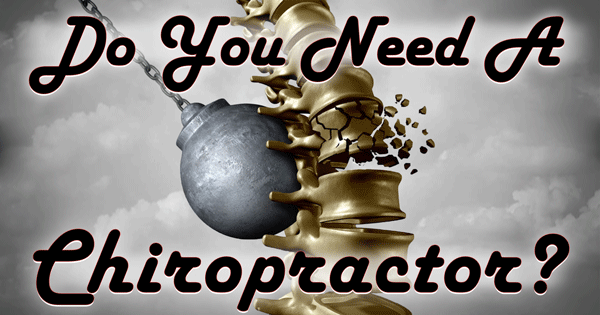 As some of you may have heard, the quarterback for the New Orleans Saints, Drew Brees, has put himself in a little predicament. A few days ago, he made the following statement about the American flag and kneeling during the National Anthem:

â€œI will never agree with anybody disrespecting the flag of the United States of America or our country,â€ Brees told Yahoo. â€œLet me just tell what I see or what I feel when the national anthem is played and when I look at the flag of the United States. I envision my two grandfathers, who fought for this country during World War II, one in the Army and one in the Marine Corps. Both risking their lives to protect our country and to try to make our country and this world a better place.

â€œSo every time I stand with my hand over my heart looking at that flag and singing the national anthem, thatâ€™s what I think about,â€ Brees continued. â€œAnd in many cases, that brings me to tears, thinking about all that has been sacrificed.â€ 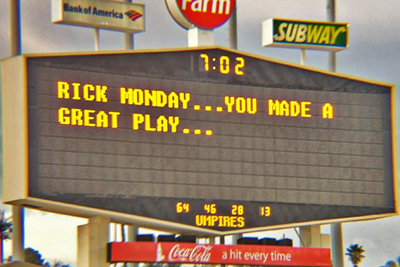 Does anyone remember what Rick Monday did in 1976 when playing for the Chicago Cubs at Dodgers Stadium in Los Angeles? 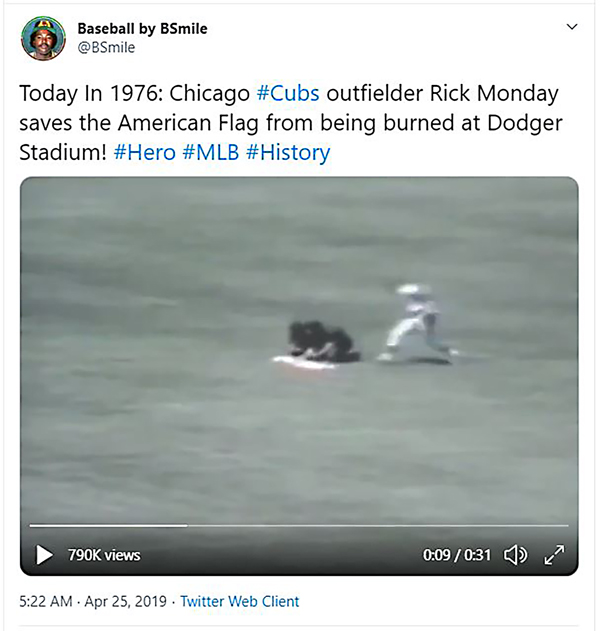 TheÂ father and son in the video were arrested for attempting to burn the flag. The next time Rick Monday was up to bat, he received a standing ovation, and the message board read, â€œRick Mondayâ€¦You Made a Great Playâ€¦â€ He later said, â€œIf youâ€™re going to burn the flag, donâ€™t do it around me. Iâ€™ve been to too many veteransâ€™ hospitals and seen too many broken bodies of guys who tried to protect it.â€

So Rick Monday was a hero back in the day for not letting someone desecrate the flag, but Drew Brees canâ€™t stand up for it in 2020? The real controversy is what has happened to this great nation in the last 50 years. 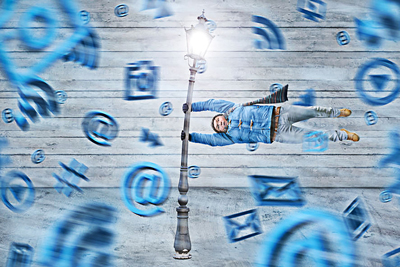 Well, the repercussions for Mr. Brees came quickly. The â€œwokeâ€ left lambasted him. Ate him up. He was labeled ignorant and foolish. Not up-to-speed with what has been and is going on in America.

So what did Drew do when the woke left mob came after him? When the thought-police didnâ€™t like what he said or how he said it? Did he stand his ground? Did he plant his feet on what he knew to be true? Did he double-down and say we should never disrespect the flag? Nope. He wilted like a cheap suit on a hot and humid New Orleans summer day.

â€œI would like to apologize to my friends, teammates, the City of New Orleans, the black community, NFL community, and anyone I hurt with my comments yesterday. In speaking with some of you, it breaks my heart to know the pain I have caused.

â€œIn an attempt to talk about respect, unity, and solidarity centered around the American flag and the national anthem, I made comments that were insensitive and completely missed the mark on the issues we are facing right now as a country. They lacked awareness and any type of compassion or empathy.â€

I do hope you have done some basic studying and realize that you are being lied to. 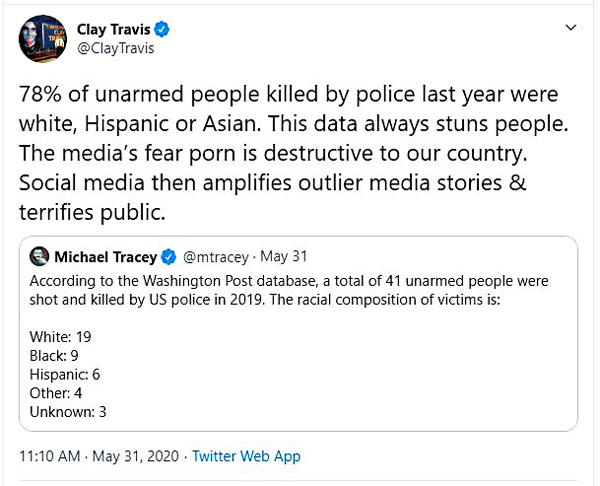 Did you know that more whites are shot and killed by police each year than black folks, and the numbers are not even close? 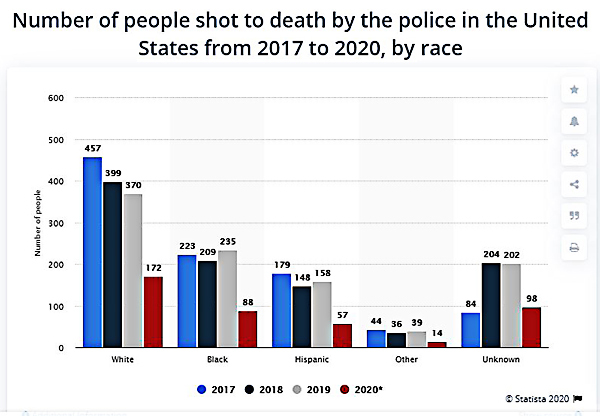 If you want to dig deeper, here is a good article by Andrew McCarthy called The â€˜Institutional Racismâ€™ Canard. The facts pull back the curtain on the real political agenda going on right now: 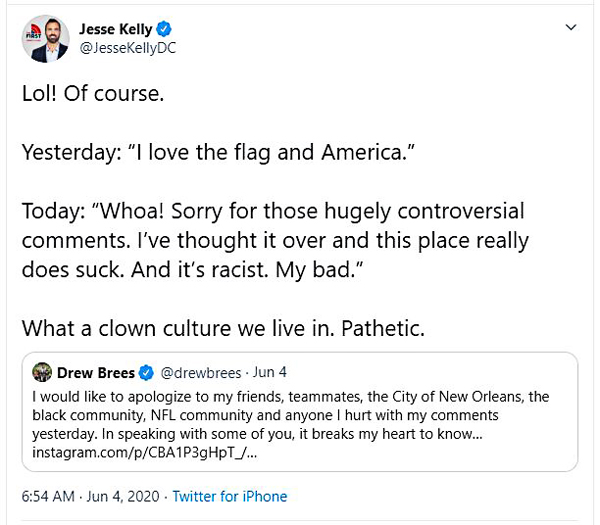 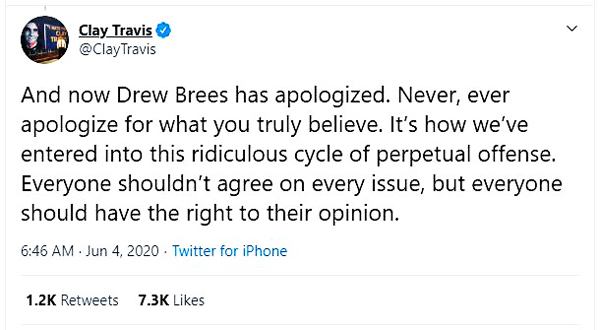 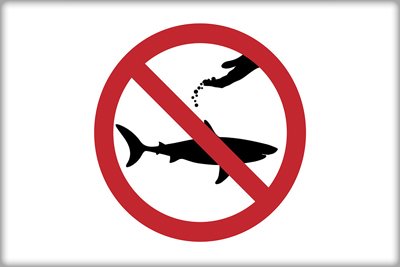 So, letâ€™s ask the question: Why do people apologize? Very simply, they know they could be wrong. They made a mistake and want to right the ship with the person they wronged. No problem at all. It is always a good thing to do.

But what you see right now is the Twitter mob going after people. Social Media is on the hunt. The Twitter, Facebook, and Instagram crowds are the cancel culture. They are out to seek and destroy. And if you are in their crosshairs, it means:Â â€œYou will do it my way or you are toast. You will believe like I believe, or we will flatÂ out destroy you. And you companies out there, we will organize major boycotts against you until you capitulate to us and, of course, give us a few greenbacks!â€Â Remember to always follow the money.

Mollie Hemingway, Fox contributor, editor, and columnist helps us toÂ Â understand one thing that happens when you apologize to the mob: 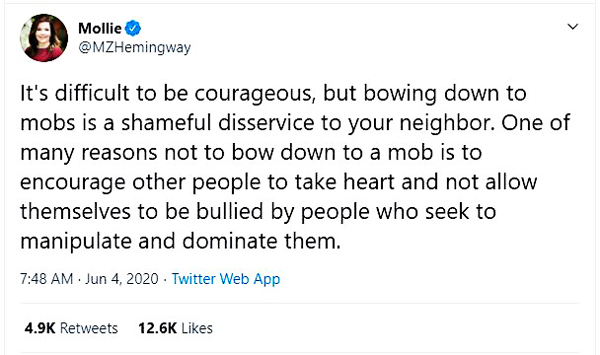 You see, whenever you back down, you have just encouraged others to do the same. You did not set the example for them to stand for what is right. You did not teach them that it is okay in life to have different opinions from others. Instead, you taught them, sadly, to live life by feelings and popular narratives rather than by the facts.

I saw a great quote by syndicated columnist and author David Harsanyi where he saidÂ the following:

There is no problem not believing like everyone else. However, young people today are being trained with groupthink. We are not taught how to argue our position to bring people over to our side. I already know there will be some folks who wonâ€™t like this newsletter. So what? It doesnâ€™t matter to me. If you make a better argument than I am making here, share it. Get out there. Convince people to come over to your side.

But Drew Brees wasnâ€™t finished. He apologized a second time! 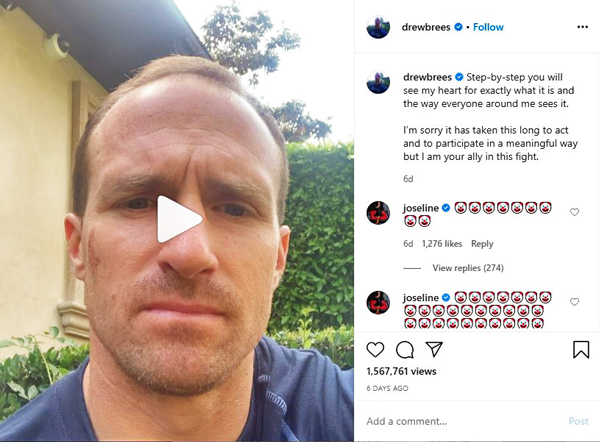 I guess he thinks the more he grovels, the more the mob will back off. Sorry, it doesnâ€™tÂ work that way. Now they feel empowered. Now they know they can get you to back off of your position and, many times, with ease. And they will love doing it the next time as well.

Quit kneeling to the mob. Cut out the groveling. Stand your ground.

But sadly, this is not the first time Drew has bowed his knee to the mob. Last fall, he took part in promoting â€œBring Your Bible to Schoolâ€ day with Focus on the Family. Well, when the leftist LGBTQXYZ mob found out about that, they started firing away! Do you see a pattern yet? So what did Drew do? Did he stand his ground? Did he boldly proclaim what the Bible says from Genesis to Revelation? Nope. He capitulated to the mob. 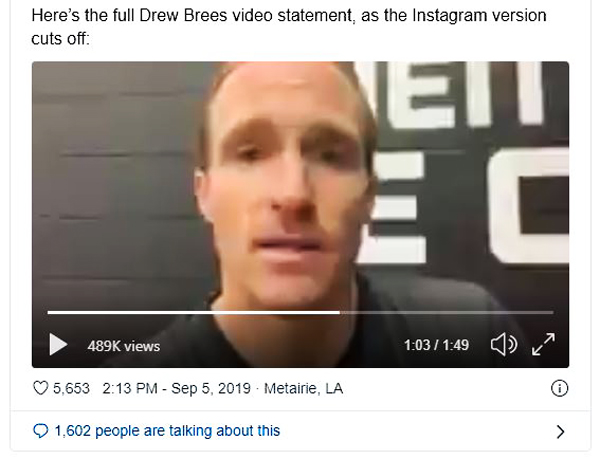 So I guess we are seeing a pattern here. The pattern seems to be that once the heat turns up, Drew steps away to find some shade. 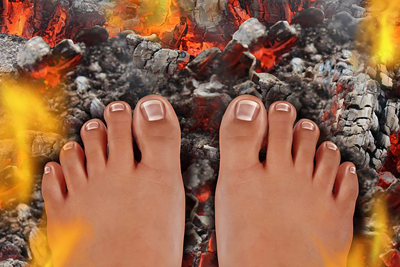 Everything Iâ€™ve read about him says he is a very strong Christian. Very strong family man. All good things. But what I am about to say here is something I mean. I have serious doubts about him being a soul winner. Why would I say that? Soul winners understand that persecution comes with the territory. You experience it often enough that it doesnâ€™t bother you as much over time, and God gives you the strength to stand. You take the heat because you know that souls are at stake.

Have you ever seen Drew on a street corner in New Orleans handing out gospel tracts? Do you see him at Jackson Square engaging the lost in a verbal conversation? I am encouraging every believer reading this newsletter to pick up the pace with sharing your faith. One reason why is when the mob comes, you wonâ€™t be spineless. You have already seen God take you through battle after battle, and you know your place of protection is to stand and speak truth.

And now, Lord, behold their threatenings: and grant unto thy servants, that with all boldness they may speak thy word, By stretching forth thine hand to heal; and that signs and wonders may be done by the name of thy holy child Jesus. And when they had prayed, the place was shaken where they were assembled together; and they were all filled with the Holy Ghost, and they spake the word of God with boldness.

Long time therefore abode they speaking boldly in the Lord, which gave testimony unto the word of his grace, and granted signs and wonders to be done by their hands.

Then Paul and Barnabas waxed bold, and said, It was necessary that the word of God should first have been spoken to you: but seeing ye put it from you, and judge yourselves unworthy of everlasting life, lo, we turn to the Gentiles.

And he went into the synagogue, and spake boldly for the space of three months, disputing and persuading the things concerning the kingdom of God. 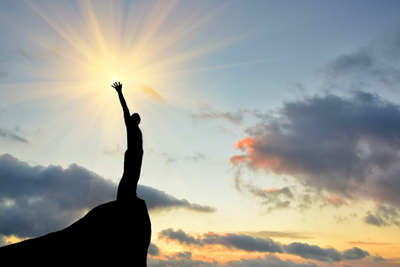 Sometimes in life, we want a cool summer breeze or a warm breeze. But if you decide to share truth as you shoot the breeze with someone, donâ€™t back up or back down. Stand your ground.

Stand up for what you believe, and stop apologizing.

And stop listening to people because they are good at playing a kidâ€™s game. Yes, football, baseball, basketball, etc., are just kidsâ€™ games and nothing more than that. And, if someone is pretty good at a kidâ€™s game and they make millions of dollars at it, that doesnâ€™t mean their opinion is of any importance to the rest of us. If professional sports ended tomorrow, we would all be just fine.

But if you are spineless, maybe it is time to do some looting. Break into that chiropractorâ€™s office that is closed, and go up to their human skeleton, remove the spine, and place it properly in your back. Maybe that will stiffen your resolve for what will be happening in the coming days.

Get your children out of the public education system, both at the high school and college levels. They are indoctrination centers of the worst kind. They are warping the minds of our kids to hate America. And there is a great chance that the hate-America crowd will be even worse when instructing teens and college students this fall.

If you donâ€™t want to make a bold stand for God, it is time for you just to slink off to the side. Get in the Word. See how other believers in the Lord lived. Align yourselves with them. Then go, stand, and speak. Finish well.

P.S. Now Drew Breesâ€™ wife has weighed in on the matter. So glad she stood up for this great country. Oops, my bad. She has been listening to her husband the last few days. Every white person is now the problem. She might be right about one thing: She and her husband are the problem. This family needs to step off to the side at this time, but they wonâ€™t. They are woke now. And they have found a platform that will bring them more attention.

P.P.S. And, always remember, if the mob comes after you, it means you have probably stood for the right cause.