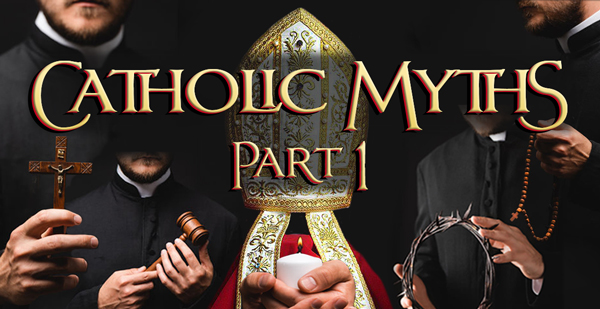 A couple of the real joys in life are soul winning and reading. And one of the good things about them is combining the two. When you pick up a book that helps you with your soul winning, it shows you how valuable reading really is.

Catholic Myths by Charles Zonca is an excellent book. The subtitle is â€œA Biblical Examination into the Myths, Rituals, Relics, Superstitions, and Inventions of the Roman Catholic Church.â€ That pretty much sums it up! I really could not think of one thing about the Catholic Church that is not touched on in this book. Charles did a very thorough job in just 212 pages, and he repeatedly went back to the Bible to prove his points. He was able to do so with a bit of humor, which made it a nice, quick read. That is not easy to do, but he accomplished it very well. 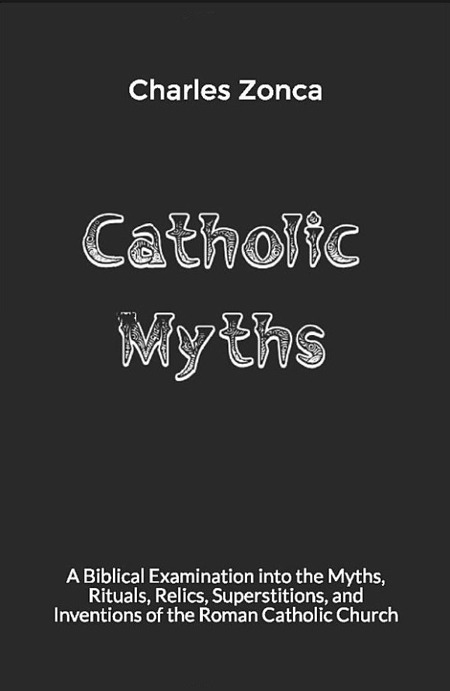 Charles started off strong right from the beginning as he tackled one of the biggest untruths of Catholicism: That Peter was the foundation of the RCC and was, as many of them say, the first Pope.

â€œThe first 31 popes all shed their blood in defense of the One, Holy, Catholic, and Apostolic Church. Pope John Paul II is the 266th successor in the unbroken line of popes since Saint Peter.â€ 1

The RCC believes in something called Apostolic Succession. It basically means that all of the bishops and the bishop of Rome (the Pope) are in the succession of Peter.

â€œIt is certainly the case that the relationships between the Twelve Apostles and their successors, and the relationship between Peter and subsequent popes, was in the beginning quite complicated; nevertheless, the fundamental lines of Catholic doctrine on this matter are clear: The apostolic ministry continues in the Church through a succession of bishops up to the present time, and the ministry of Peter continues in the papacy down to today.â€ 2

As we live our lives by TETE: Test Everything and Test Everybody, where do we go to find our answers? The place everyone should have been going since the Bible was put in ink on papyri.

And I say also unto thee, That thou art Peter, and upon this rock I will build my church; and the gates of hell shall not prevail against it.

For other foundation can no man lay than that is laid, which is Jesus Christ.

And did all drink the same spiritual drink: for they drank of that spiritual Rock that followed them: and that Rock was Christ.

Jesus saith unto them, Did ye never read in the scriptures, The stone which the builders rejected, the same is become the head of the corner: this is the Lord’s doing, and it is marvellous in our eyes?

Wherefore? Because they sought it not by faith, but as it were by the works of the law. For they stumbled at that stumblingstone;

As it is written, Behold, I lay in Sion a stumblingstone and rock of offence: and whosoever believeth on him shall not be ashamed.

To whom coming, as unto a living stone, disallowed indeed of men, but chosen of God, and precious,

Ye also, as lively stones, are built up a spiritual house, an holy priesthood, to offer up spiritual sacrifices, acceptable to God by Jesus Christ.

Wherefore also it is contained in the scripture, Behold, I lay in Sion a chief corner stone, elect, precious: and he that believeth on him shall not be confounded.

Unto you therefore which believe he is precious: but unto them which be disobedient, the stone which the builders disallowed, the same is made the head of the corner,

And a stone of stumbling, and a rock of offence, even to them which stumble at the word, being disobedient: whereunto also they were appointed.

As he brought up the topic of apostolic succession, his points made a lot of sense.

â€œIf it is true that Peter was the first bishop of Rome, how then could Paul be a legitimate apostle? For it is certain that he was not called by Peter and that he was not consecrated by Peter laying hands on him. He was called directly by Jesus (Acts 9:15), independently of Peter. He was baptized by Ananias, a disciple (Acts 9,17,18).â€ 3

â€œThere is no intimation in the Scriptures that the words of our Savior addressed to Simon Peter made him ruler and head of the church. In the Greek language, there is a play upon his nameâ€”Thou are Petros (a little stone) and upon this petra (rock) I will build my church.â€ Jesus Himself was the Rock. Jesus never said He would build His church on Peter, â€˜a little stone.â€™ That would be too faulty a foundation.â€ 4

And, of course, there is not a shred of historical evidence that Peter was ever in Rome! It is hard to be the bishop of Rome if you have never set foot there before!!

Another major foundational belief within Roman Catholicism is what is called Transubstantiation.

â€œTransubstantiation converts of the substance of the Eucharistic elements, bread and wine, into the actual body and blood of Christ at consecration.â€ 5

â€œThe syncretism (the amalgamation of different religions, cultures, or schools of thought) and mysticism of the Middle East were great factors influencing the West, particularly Italy (see Roman Society from Nero to Marcus Aurelius by Samuel Dill). In Egypt, priests would consecrate mest cakes (round, thin cakes) which were supposed to become the flesh of Osiris (see Encyclopedia of Religions, Vol. 2, p. 76). The roundness of the cakes symbolized the sun, which fitted well as Osiris was their sun deity. The pattern of giving intact round wafers stems from these pagans, not from Christ. Jesus offered His followers broken fragments of unleavened flat bread, that He said represented His body which would be given for them (Luke 22:19). The idea of transubstantiation was also characteristic of the religion of Mithraism whose sacraments of cakes and Haoma (blood) drink closely parallel the Catholic Eucharistic rite. (Mithraism was the worship of Mithra, the Iranian god of the sun, justice, contract, and was in pre-Zoroastrian Iran.)â€ 6

Letâ€™s see what the Roman Catholic Council of Trent has to say about all of this:

â€œCanon 1: â€˜If any one shall deny that the body and blood, together with the soul and divinity of our Lord Jesus Christ, and therefore entire Christ, are truly, really, and substantially contained in the sacrament of the most holy Eucharist; and shall say that He is only in it as a sign or in a figure or virtuallyâ€”let him be accursed.â€™â€ 7

â€œCanon 5: â€˜If any one says that the principal fruit of the most holy Eucharist is the remission of sins or that other effects do not result from itâ€”let him be accursed.â€™â€ 8

â€œCanon 6: â€˜If any one shall say that Christ, the only begotten Son of God, is not to be adored in the holy sacrament of the Eucharist, even with the open worship of latria (supreme worship allowed to God alone), and therefore not to be venerated with any peculiar festal celebrity, nor to be solemnly carried about in processions according to the praiseworthy and universal rites and customs of the holy Church, and that He is not to be publicly set before the people to be adored, and that His adorers are idolatersâ€”let him be accursed.â€ 9

I have to be honest: I am feeling pretty cursed right about now!! Wow. The RCC sure likes pronouncing judgments on others! But again, what they are saying is not biblical. Jesus does not inhabit the bread and wine of the Catholic mass. It was not biblical 2000 years ago, and it is not biblical today.

But this should raise huge caution in your spirit. For decades, we have seen the ecumenical movement trying to merge the Protestant world with the Catholic church. From Billy Graham to Rick Warren and others, many are trying to blend these two belief systems together. But by asking one simple question, you can figure out which direction you should be moving. Has the RCC renounced any of its false teachings in order for these two groups to come together? And, of course, the answer is no.

Part of their goal in bringing these two movements closer is to have you believe in their false teachings. When Catholics get saved, they leave the Catholic church. They realize they cannot adhere to both the Bible and to Roman Catholic teachings. Their Catechism is in direct contradiction to so much of Scripture. One or the other. The Bible or the Catholic Catechism. Your choice. Then when you make the correct eternal choice, help others to make the same choice and leave that false religious system behind as well.

P.S. I was listening to a gospel station in my car today. Two different times the DJ said, â€œOur Catholic brothers and sisters.â€ What does that mean? It means she doesnâ€™t understand Catholicism, and, more than likely, will not be witnessing to the Catholic people she knows or encounters. Donâ€™t buy the lie. Stand up for the biblical Jesus and for biblical truth. 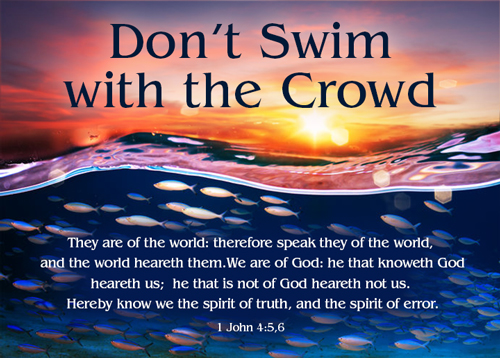 P.P.S. Watch six minutes from where this video opens. Itâ€™s heartbreaking to see. The Eugenics movement is alive and well. They do not care about you or your family. You are nothing more than a profit center and a lab rat for them. Protect your children from these evil people. This family â€œtrusted the scienceâ€ and were â€œpro-vaccine,â€ but the Bible warns us to be careful:

Thus saith the LORD; Cursed be the man that trusteth in man, and maketh flesh his arm, and whose heart departeth from the LORD. 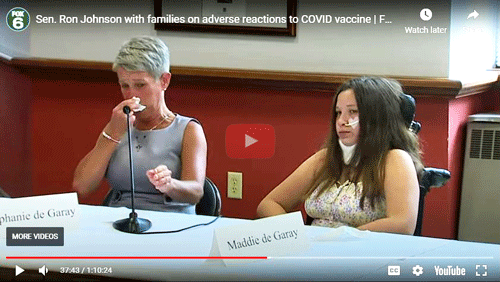 Back toÂ Walking in Truth